The Dunfermline Historical Society organises talks and visits for people with an interest in local and national history. The talks programme runs from September to May and visits usually take place in April and June. We vary our visits between day trips and longer, week-end trips to explore places further from Dunfermline.

Meetings are held in the Abbey Church Hall, Abbey Park Place, Dunfermline, on the third Thursday of each month and start at 7:30 pm. Visitors are charged a fee of £3.00 per meeting and are made very welcome. The December meeting is a social evening for members only, and is held on the second Thursday.

To contact the Society, please email Dunfermline Historical Society. But please remember the society is a voluntary, membership organisation and does not carry out research on behalf of others, nor does it hold any archives, artifacts etc. 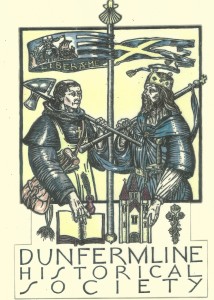 The Society as we know it today began life as the Dunfermline Museum Society, meeting for the first time in Sep 1970 under the chairmanship of Martin Norgate – the Curator of Dunfermline Museum.  Despite having various speakers, and undertaking visits to places of interest, the Museum Society suffered from the problem of low membership. By 1988 there were only 25 members which meant the time had come to either wind up the Society or make some significant changes.  Fortunately, the latter option was chosen and in 1988 the new name – Dunfermline Historical Society – was adopted.  This name reflected the wider range of subjects which would be covered. The new constitution stated the aims of the Dunfermline Historical Society “to promote interest in local, regional and national history”.

From 1996 to 2017 the Society ran under the Chairmanship of George Robertson and George and the committee worked extremely hard to make the Society a success. In May 2017, George became our Honorary President with Carolyn Thompson taking over as Chairman. We continue to attract quality speakers who talk on many interesting subjects. An effort is made to cover national as well as local topics.  In most years, a three day trip and a single day trip are organised and these have now covered most parts of Scotland and northern England. There is also the annual Christmas party and glass of wine at the AGM, all of which makes for a welcoming atmosphere.

Over the years the Society has held its meetings in several venues including the splendid Old Burgh Court Room in Dunfermline City Chambers. Currently, however, the Society meets in the Dunfermline Abbey Church Hall, which can accommodate a larger audience, as the people of Dunfermline continue to show an avid interest in local and national history.

Some of the material on this page was sourced from an article by Elaine Campbell published in the Scottish Local History Magazine in 2012 and based on a talk given at the society’s fortieth anniversary by George Robertson.