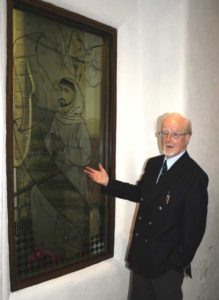 When John Amos passed away recently, Dunfermline lost one of her ain, and a special one at that to those of us who love exploring the history of this old town.

John McDonald Amos as born in St. Leonard`s Street Dunfermline on November 8th 1929.  John`s parents were Valentine and Christine Amos and he had two older sisters.  The family moved to Priory Lane and later to John Street and John attended Commercial Primary School and then Queen Anne Junior Secondary.  When Commercial School was billeted during the war John received part of his schooling at a private house in Priory Lane.  His family later moved to a house in Izatt Avenue with a view of the Abbey and the Dunfermline skyline

On leaving school John became a messenger boy, then a postman, finally signing up with the RAF and serving eight years, a time he remembered with fondness.  Unable to become an RAF electrician as planned, because of colour blindness, John was reassigned as a driver and obtained his HGV licence. On leaving the RAF, John became a driver at the Rosyth Royal Dockyard, where he stayed for 16 years.

On his 29th birthday in 1958, John married Dorothy Innes at Canmore Congregational Church and they went on to have three children, Mark, Jacqueline and Christopher.

In the early 1970s John`s life took a totally different path.  He returned to education at Kirkcaldy Technical College where he achieved O grades and Highers, including English, and went on to Moray House, Edinburgh, for teacher training.  It was a proud family who saw John graduate.

On graduation in 1974 John was assigned to Pitcorthie Primary School where he stayed for five years, taking a short course in mathematics at Fod House during this time.  In 1979 John moved to Woodmill High School where he taught in the Special Education Department until he retired in 1994.

While at Pitcorthie he became involved with the Speakers Club and Dunfermline Sound, which recorded articles from the Dunfermline Press and other newspapers and distributed the tapes to blind and partially sighted people in the area.

John had always had a liking for history especially the earlier history of Dunfermline and in about 1988 Dorothy mentioned this to Margaret Dean, who was spearheading the action to turn Abbot House into a heritage centre and John became involved from the earliest stages.  When Abbot House opened in 1995, John was one of the original guides, something he became passionate about in the years that followed.

John became one of the best guides Abbot House ever had.  It became a huge part of his life and there he was able to develop his understanding of the medieval history of Dunfermline and Scotland and incorporate it into his guiding. Always informative and good-humoured, John became a much loved volunteer and his 70th birthday was celebrated with a party at Abbot House and a presentation of Henderson`s Annals of Dunfermline.   With Bert McEwan, another stalwart, John wrote the guide book to Abbot House.

As a fellow guide at the `Pink House`, I remember John especially for two things.  One was for his extensive knowledge of the Canmore and Bruce dynasties: when I was collecting biographies of Dunfermline people John contributed scholarly articles on David II and Robert II.  The other thing was John`s way with people with disabilities.  Family experiences, as well as John`s work at Woodmill, had probably contributed to his innate understanding in this field and he was determined that everyone visiting Abbot House should enjoy the experience. For example, John devised a programme of videos, talks and artefacts for people who were unable to climb the stairs at the house, and when taking people with sight problems round the House and the Abbey he got them to feel items, including hugging the pillars in the Abbey to gauge their size.

After several years of retirement at his and Dorothy`s lovely home in Newmills, John began to suffer increasing bouts of ill health, and passed away at Headwell House Nursing Home on May 1st aged 87.  John is sadly missed by his family and all who knew him.

Thanks to Dorothy Amos for most of the information.