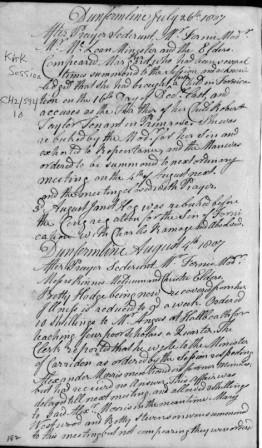 The kirk session of ministers and elders formed the lowest rung of four ecclesiastical courts (above it being the presbytery, synod and general assembly) and was responsible for church affairs and the moral behaviour of the people of the parish. The session took such moral lapses as adultery and fornication seriously, not only because they were judged rash, ill-considered and immoral, but because if a child resulted he or she might be a drain on the resources of the kirk and community. People of any class could expect censure from the kirk session if they misbehaved, although not all appeared to have received the usual sentence of being rebuked on the `black stool` before the congregation.

One family that seemed an unlikely cause for concern on this front was the respected Ker (or Kerr) family. John Ker and his wife Margaret Pearson had four children, three boys John, Robert and James, born in 1771, 1779 and 1781 respectively and one daughter, Margaret, born in 1777.  All three brothers became prosperous middle-class businessmen. John Ker junior owned a yarn bleaching business in Bothwell Street while Robert and James became partners in a damask weaving business in Collier Row (later Bruce Street) as well as being agents for the commercial bank.  John Kerr later became Provost of Dunfermline and James Ker the owner of the fine estate of Middlebank.

The Kers, however, were not exempt from scandal and involvement with the kirk session.  On March 3rd 1807 the session reported that they had resolved to summon Margaret Ker to their next meeting `it having been reported by William Meldrum that the said Margaret had brought forth a child in fornication some time ago`. Margaret did not compear (appear officially) on May 5th and was to be cited again.  On July 26 it was reported that `Compeard Margaret Ker who had been several times summoned to the session and acknowledged that she had `brought forth a child in fornication on the 16th day of December last and accuses as the Father of her Child Robert Taylor, Tenant in Primrose`.  She was rebuked by the Moderator (minister in charge) for her sin and exhorted to Repentance, and the Man was ordered to be summoned to the next ordinary meeting on the 4th of August.

Margaret was 30 by this time and Robert Taylor had been a widower for some years.  The Parish Register of Births contains the following entry: `Robert Taylor in Primrose and Margaret Ker had a daughter born in Fornication on the 17th December 1806 baptized by Mr. Peddie, Minister in the Secession Edinburgh and named Margaret`. On August 4th Robert Taylor sent a letter stating that he could not attend as it was market day; he supposed it was respecting Miss Ker`s child but he had just to observe as before that he could not acquiesce to what is laid to his charge. In September both Margaret and Robert adhered to their former statements of accusation and denial respectively.

Nothing happened for two months but on December 1st a letter was read from John Ker, Margaret`s older brother, which declared:

`Sir, Your Officer by your desire upon Saturday last gave my Sister a Summons to attend the Session this day.  I am by her desire to inform you, that as she does not now adhere to the Established Church, she does not consider that you have anything to do with her.  I have therefore to request you, in her Name, not to trouble her any more, Yours, John Ker`.

This letter seems to have had no effect as Margaret continued to be cited, although she had apparently tried to get out of it by joining another church.

On January 5th 1808 Margaret Ker and Robert Taylor were called before the session but did not turn up and `This being a case of Contumacy on the part of the Woman the Session referred the whole Circumstance to the Presbytery for advice`.  Mr. David Stenhouse appeared on the part of Robert Taylor and requested Extracts of the proceedings of the Session in this case, particularly of the letter delivered to the Session subscribed by Mr. John Ker on the part of his Sister. Both Margaret and Robert duly compeared before the Presbytery and their minutes for September 6th 1808 show that Margaret continued to accuse Taylor `and declared he was the only person that ever was guilty with her`.

Presbytery remitted the case to Session for further enquiry and on September 27th it was decided to summon the couple again.  Robert intended to call witnesses, not to deny fornication, but to prove that he was not in Dunfermline when Margaret fell pregnant and, providing the baby was born full term, could not be the father.

On December 27th Robert told the session that he could not be guilty as `he was not near her when she fell with child` as he `was confined to the farm in the Month of March and April`.  On being asked if at any time he had been guilty of fornication with Margaret Ker these three years past, he answered that he was not guilty with her `Any Time she could bear that Child she lays to his charge`. Margaret stated that as Robert did not deny guilt she did not think it necessary for her to call witnesses but left it `to the Kirk Session to determine the Cause as they shall see proper`.  Mr. Taylor offered to prove that the Child was born to the full time, and that was not within six weeks of the Time that Margaret Ker condescended on his guilt with her, which was fixed on the 2nd of May 1806, by bringing forward Mrs. Barrowman the Midwife.  He further offered to prove that, from his inability of being from the Farm of Primrose, he `did not see Miss Ker during the whole Months of March and April or the Most of April` and would send a list of witnesses to this to the Session Clerk.

On January 3 1809 Margaret did not compear but Robert`s witnesses were examined. Ann Kesson aged 23 deponed (stated under oath) that she was servant to Mr. Taylor one year before Miss Ker brought forth her child and that her Master Robert Taylor was in Dunfermline at the March fair on the 12th of March when he fell and dislocated his arm and was otherwise bruised which confined him at Primrose till the 2nd of May. Mrs. Barrowman Midwife deponed that Margaret Ker`s child was born to the full time. Margaret had changed her mind about witnesses and on April 25th named Isabel Pottie and Barbara Drummond in order to disprove the evidence of Ann Kesson.

Compearing again on June 13th, Ann Kesson said there had been a mistake in her Evidence as she had been servant to Robert Taylor one year and a half before the birth of the child, not one year.  Asked if Mr. Taylor could have been in Dunfermline without her knowing, she deponed that he might have been but the state of his arm was such that he could not get on a Meet-bodied (close-fitting) coat without its being slit, and could not get on a greatcoat above the slit coat.  She thought that Mr. Taylor had not on a Meet-bodied coat from the March fair till a Snowy day, which she thinks was the 2nd of May, when his daughter, Miss Taylor, said he had now got on his whole Sleeve coat and he and his Laird dined with Dr. Stenhouse that day. Elizabeth (or Isabel) Pottie deponed that she had been a servant to Mrs. Ker, Margaret`s mother, and recollected that soon after the March fair of 1806 Mrs. Ker asked her to go to Primrose to see how Mr. Taylor was as he had hurt his arm, and that a few days later she had seen Mr. Taylor in Mrs. Ker`s house.

Barbara Drummond, aged 20, deponed that she had also been a servant to Mrs. Ker and like Bell Pottie had seen Mr. Taylor in Mrs. Ker`s house within eight days after Bell went down to Primrose.  The evidence of these two witnesses showed that it was likely that Robert Taylor was not telling the truth about his movements.  The session ordered the Officer to cite Mr. Taylor to appear at the next meeting on June 27th and to bring forward such further evidence as he wished. 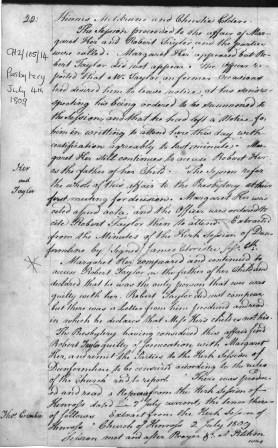 Extract from the Presbytery Minutes

On June 27th Margaret compeared but not Robert, although the officer reported he had left notice of the summons at his son`s as he had requested, and it was decided to refer the whole of the affair to Presbytery. On July 4th 1809 Presbytery re-examined the whole affair and they found Robert Taylor `guilty of fornication with Margaret Ker and remit the parties to the Kirk Session of Dunfermline to be censured according to the rites of the Church`.  The session minutes contain no apparent record of the usual rebuke before the congregation and perhaps the couple were reprimanded privately by the minister.

These detailed investigations which lasted for more than two years demonstrate the length to which the kirk session would go to get to the bottom of cases of fornication and illegitimate births.  Meanwhile what became of the baby at the heart of this case?  Daniel Thomson claims in 1893 in `Anent Dunfermline`, his collection of local bits and pieces, that early in the century the grandparents and uncle of a friend of his travelled to Glasgow, the uncle carrying a roll of cloth and the grandmother carrying a baby, which had been handed to her by the Kerr brothers for delivery to someone in the city. If this baby was Robert and Margaret`s daughter she must have returned to Dunfermline because on January 2nd 1830, as Margaret Taylor, she married James Howieson, a wright. The couple had four children and lived variously in Campbell Street, New Row, Monastery Street and East Nethertown, where Margaret died in 1872.

Margaret Ker went on to make a good marriage.  In November 1810, four years after the birth of her daughter, she married Neil McDiarmid an undertaker (contractor) in Dunfermline, brother to Mrs. Joseph Paton, the mother of Noel (later Sir Noel) and the other artistic Patons. Neil and Margaret had a family of four boys and two girls between 1812 and 1821. Three of the sons emigrated to Australia but the girls Emilia and another Margaret were brought up `as ladies` by their uncle John Ker in Bothwell Street.  Margaret Ker died in December 1850 aged 73.

It is curious to think that, as daughters of Margaret Kerr, the two younger Margarets (Taylor and McDiarmid) were half sisters, who stayed in the same town but had very different lives and may well have never met.

Daniel Thomson `Anent Dunfermline`, Vol.2, items 256, 553  Thomson uses a very similar story about a baby being smuggled to Glasgow in his `John Orrason – a Social Castaway` of 1897 which appeared in the Dunfermline Press.