‘Westward Ho!’ – A Trip to Glasgow 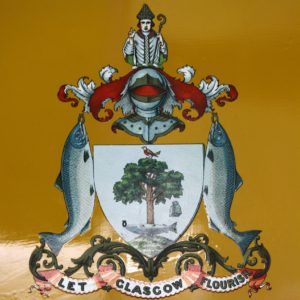 A sunny June morning saw Dunfermline Historical Society members travel westwards to enjoy a day out in Glasgow. Our first stop was at Bothwell Castle in Uddingston, a most impressive medieval red sandstone ruin. Bothwell is really two castles in one. The original castle was built in the later 13th century by the Murrays, after they acquired the lordship of Bothwell in 1242. Conceived on a grand scale, their plans put it on a par with Edward I of England’s mighty Caernarfon in North Wales, and ahead of its Scottish contemporaries of Kildrummy and Caerlaverock. Although they never fully realised their plans, a great circular donjon or keep was completed, serving as their private residence. It still stands over 27m high. Due to its strategic location beside the river Clyde, the castle changed hands several times during the Wars of Independence. As it was severely damaged, it fell to the new owners, the Black Douglases and the third Earl, Archibald ‘the Grim’, illegitimate son of ‘the good Sir James’ of Douglas, Robert Bruce’s warrior companion, to rebuild it. Much of what we see today is his, and his son’s, work from the late 14th century. They constructed a more elegant two storey domestic range comprising a spacious chapel and Great Hall. In 1455 the powerful Black Douglases were overthrown by James II and Bothwell came into Crown possession. It was entrusted to the safe-keeping of several noble families in succession, including the Hepburns, one of whom was later to become the third husband of Mary Queen of Scots. By 1700 the castle lay abandoned and eventually was placed in State care in 1935.

Please view the photos in the slideshow

For a complete contrast, our next visit took us to the Riverside Museum: Scotland’s Museum of Transport and Travel, on the site of the former Pointhouse shipyard at the confluence of the rivers Clyde and Kelvin. Opposite lies Govan, once the capital of the Kingdom of Strathclyde, with its hogback stones (Viking gravemarkers) lying today in the church. Glasgow is a city that has always been ambitious about its architecture and for the collection’s third home the internationally renowned architect, the late Zaha Hadid, won the tender to design the museum in 2004. This was her first substantial project in Britain beyond the modest Maggie’s Centre at Kirkcaldy’s Victoria Hospital. The waterfront setting allows for sweeping views up and down the Clyde. The swooping z-shape and wave form of the new building, with its complex steelwork clad in zinc sheets and black glass, references both the flow of water and the flow of visitors and is a reflection of the city’s reinvention as a post-industrial pioneer. It is one of a string of striking landmarks lining the Clyde and houses one of the most impressive collections anywhere of trains (including the Clockwork Orange subway train), ship models, bicycles, motorbikes, cars, trams and buses (resplendent in Glasgow Corporation green, cream and orange livery) and reconstructed period streets. The sawtooth façade leads into a cathedral of a space housing the exhibits. On one of the walls, cars are stacked three high on cantilevered nibs projecting from the building. Particularly striking is the wall mounted shelf displaying many historic cars as they ascend the steep gradient of the The Rest and Be Thankful, part of the A83 in Argyll and Bute. Also impressive is the Bicycle Velodrome, suspended from the ceiling with some exhibits perched upside down! On the Ship Model Conveyor, probably the most unusual display as ship models were never designed to move, the models pass in front of onscreen interpretation. The Motorbike display echoes the Car Wall. One of the most engaging aspects of the museum is the glass gable end that looks towards the river, with the masts of the Tall Ship “Glenlee” visible. Launched from Port Glasgow in 1896 and brought home to be carefully restored as a floating museum, it was our next port of call.

The ‘Glenlee’ is the last of the old ‘Windjammers’ still afloat in a British port and one of the five great Clyde-built sailing ships left in the world. Most of the windjammers which survived WW1 were lost or broken up in the 1920’s and 1930’s but her life was extended by changes of use and name. In 1919 she was sold to an Italian company for short voyages in the Mediterranean and in 1921 purchased by the Spanish Navy, who used her until 1979 in various training roles. In 1992 she was bought by the Clyde Maritime Trust for restoration and use as a maritime museum.

Built to carry bulk loads cheaply, rather than for speed of delivery, she could be manned with a smaller crew than a steam ship and because she used the wind for ‘fuel’ had an enormous range. Her cargoes included coal, wheat, wool, nitrates and guano, timber, rice, sugar and crude petroleum and, despite the harshness of life aboard, she consistently made a profit for her owners. She was modernised by her Italian owners in 1920 with the installation of diesel engines which gave her a top speed of 8.5 knots, although ships never carried enough fuel for long ocean voyages. More accommodation was included under the Spanish flag, intended to house some 307 men – many more than the 25 that often manned her as a cargo vessel. After languishing in the Guadalquivir River since her retirement from active service in 1979 she was towed back home to Glasgow in June 1993. There was then a programme of substantial restoration at Yorkhill Quay, to bring her back close to her 1896 condition. The Glenlee could finally hold her head up again with pride in early 1999. She took up her new berth at Pointhouse Quay in May 2011, where she is ‘the jewel in the crown’ alongside the Riverside Museum.

After three excellent visits, we enjoyed high tea at “The Stables”, beside the Forth and Clyde Canal near Kirkintilloch. 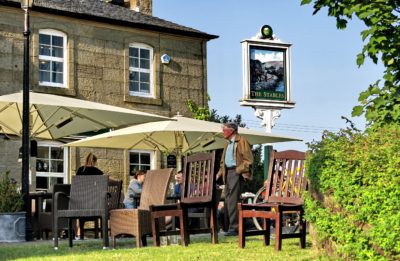 Thanks to Douglas Bell, Martin Tarr and Robin Thompson for the photographs.