In my `Did you know?` article on the Black, Blue and Red Rows of Dunfermline I asked if anyone knew where the Blue Row was situated.  It is very seldom mentioned, but that it did exist is evident from the parish registers.  It was in Blue Row that little James Gordon died aged two in  February 1852 from unknown causes and Alexander Adamson was born to John McLaren Adamson and Jean Bell in January 1858, and no doubt many other examples could be found. 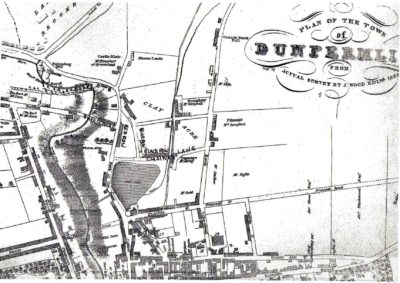 Although Red Row (marked `B` on the original map) is correctly placed round the corner from Harriebrae `A` along the road called `Back of the Dam` new information has led me to reposition Black Row and given me an idea of where Blue Row was situated.

I believe that Black Row should be marked `C` as part of Cusine`s Lane, which would bear out an account of 1855 which describes it as a row of `mean looking houses flanking the north side of the Dam`.  I also believe that Blue Row ran northward at the west end of Black Row.  A revised map makes this clear.

Extracts from the minutes of the Dunfermline Police Commissioners 1854-1865 have led me to this conclusion.  For example: October 9th 1854, p. 56: Lighting Committee: `Lamp to be put up to light Black Row and Blue Row, placed in Blue Row 21 ft. from its corner` and August 7th 1855, p. 104: `Black Row – lamp to be placed at the west end of water trinket in front of houses so as to light both Black Row and Blue Row`.   If a lamp at the end of one street could light up another it is likely that they were at right angles.

In my article I mentioned how unhealthy these rows were and proof that this was common knowledge comes from a pamphlet of 1849 called `The Dam Affair` in which James Adamson addresses James Hunt of Pittencrieff, proprietor of the Dam, at a time when a debate was raging about the threat to health posed by the filthy water.  Cholera was feared to be on its way – and would indeed hit Dunfermline badly – and Adamson claims that the Dam would cause scores more people to `fall a sacrifice to its attacks` who might otherwise have escaped.  The people living near the dam were already vulnerable from the `noxious inhalations` and Adamson talks of the early deaths of fathers, mothers and children, describes a sallow-looking, narrow-shouldered young man unable to breathe properly and a middle-aged man who was prematurely old, infirm and pauperised, and asks Hunt to `Look at that pale-faced young woman; – to what quarter of Dunfermline may we suppose she belongs? Judging from her looks, and reflecting on the evidence adduced from the Dam Investigation, we might not unreasonably be led to consider her as having been born and brought up in the `Black Row`.

Black Row, Blue Row, Red Row and the Dam itself have long been swept away – perhaps it is just as well.

Sources: Dunfermline Police Commissioners Minutes (my thanks to Sue Mowat for these details);

`A letter addressed to James Hunt, Esq. of Pittencrieff on `THE DAM AFFAIR`, by Jas. Adamson, Dunfermline 1849, printed by J. Miller and Son (12 pages).

Note: Cusine`s Lane has also been called Cousin`s or Cusing`s Lane, Burt Street and Winterthur Lane.  Grant`s Bank on the map is now Pilmuir Street, Collier Row was renamed Bruce Street and Back of the Dam became Damside Street and then Upper Bruce Street.  Several other streets have been renamed or disappeared.