There Was a Soldier – a Polish Soldier……… 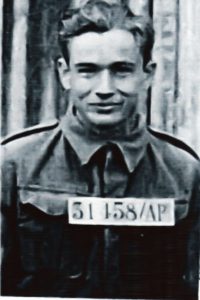 Recently, whilst researching the history of Middlebank House near Dunfermline, I stumbled across details of the death of a Polish soldier named Jan Wagner. In 1945 he had been shot and killed while attempting to escape from Middlebank, officially known at that time as No. 2 Court Martial Detention Barracks. Wagner was one of over 50 Polish military personnel being held at the Barracks, who awaited, or were there as the result of, court martial proceedings. I felt this required further research since this young man had travelled a long way from his homeland, only to die such an ignominious death in Fife.

I was unable to find any trace of Wagner’s burial in Fife records, but was eventually successful while trawling through the website of Glasgow photographer Derek Crowe. This provided me with the information that he was buried at Wellshill Cemetery, Perth and also provided a photograph of his grave stone. I contacted the Ministry of Defence, Polish Enquiries Department, which forwarded to me Wagner’s service records, including his photograph, his death certificate and also gave confirmation of his place of burial.

These service records described Jan Wagner as being born on 15th June 1922 at Turka, Lwow, Poland (now Ukraine).   His mother was named as Anna Wagner but there was no mention of his father.   His civilian occupation was given as fisherman, he was unmarried and his religion was Greek Catholic.   He was shown to be 5’5” tall, weighed 10 stones 4 pounds and had blond hair and brown eyes. 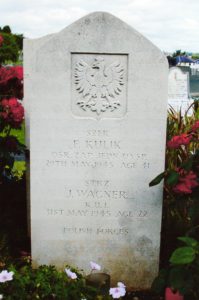 The record revealed Wagner had lived in Lwow, Poland until the campaign of 1939 when Nazi Germany invaded Western Poland and the Soviet Army invaded the eastern part of the country, taking control of the area in which he lived. As a result, Wagner, along with around one and a half million of his fellow countrymen and women, were taken to the former USSR, where he was placed in one of the infamous labour camps or Gulags.

During June 1941, Germany invaded Russia and one of the consequences was the release by the Russians of the Polish men who had been placed in the camps. The intention was to allow these men to join the Polish Armed Forces where they would be used to fight the invading German forces. Jan Wagner was one of those released, and on 28th June 1942, he enlisted in the Polish Army, joining the 3rd Polish Carpathian Rifle Division of the 2nd Polish Corps.   However, by early August he gave an indication of his later behaviour when he was charged with being Absent from his Unit.   By November of 1942, his record shows that he had been posted to the Middle East with the Polish Corps which at that time was serving in Iran, Iraq and Palestine alongside the British 8th Army.   Wagner’s service record does not reveal where he was stationed during this period.

The following year, on the re-organisation of the Polish Army, Wagner was assigned to the Polish Land Forces in the United Kingdom.   After his arrival in this country on 27th June 1943, he was posted to 9 Company, 3rd Battalion, 1st Polish Independent Parachute Brigade, of the 1st Polish Corps which was stationed in and around the Leven area of Fife.   This group was later to achieve fame whilst fighting alongside the men of the British Airborne Division at Arnhem.

However, from mid July 1943 Wagner’s service record makes sorry reading, since he appears to have spent much of his time either AWOL from his unit or, as a result, in detention.   A foretaste of things to come occurred on 19th November 1943 when he escaped from imprisonment, which resulted in him being detained on 2nd January 1944 by the British Police. He then spent much of 1944 in trouble with the military authorities and was once again reported AWOL during September of that year. 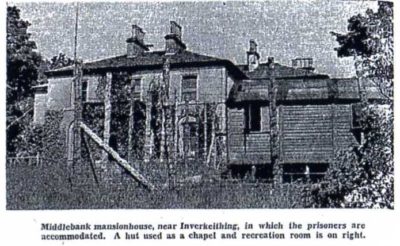 On 31st May 1945, Wagner, who on the previous day had been sentenced to two years imprisonment, having been charged with five offences including desertion, made yet another bid for freedom, this time from the Court Martial Barracks at Middlebank.  This resulted in him being shot dead by two Polish guards whose bullets struck him in the head and heart.

Jan Wagner was buried in lair 111, section B at Wellshill Cemetery, Perth on 4th June 1945 alongside another of his countrymen – 41 year old Private Franciszek Kulik – who was buried on the same day.   Wellshill Cemetery contains the graves of nearly 400 Polish service personnel, each of whom had arrived in this country in the name of freedom and subsequently gave their lives in this cause.

Why did Jan Wagner get himself into so much trouble?   Frankly I do not know.   Having no knowledge of his early days in Poland, his actions can only be assessed on the little information we have of him after the Russians overran his country.   His experiences of being deported as a teenager and then held in the Russian labour camps must surely have affected him.   This might have resulted in him rebelling against any kind of authority, causing him to be determined to seek his freedom at all costs, a determination which eventually cost him his life.

I wish to acknowledge the assistance and advice received from Derek Crowe – www.derekcrowe.com – who kindly gave me permission to reproduce his photograph of Jan Wagner’s gravestone and Margaret Goddard, Polish Historical Disclosures and Enquiries Section, RAF Northolt, Ruislip, Middlesex whose guidance – and patience – is very much appreciated.