Guns were a hot topic in Dunfermline in the summer of 1857, more specifically the town’s newly-acquired trophy of the recent Crimean War. Among the Russian armaments captured at the fall of Sevastopol had been more than 300 cannon from the fort of Redan. They were of no use to the British army, and the Government, left with the problem of how to dispose of them, came up with the idea of distributing them among the cities and chief towns of Britain and her Empire, as memorials of victory in the Crimea.

The antiquarian Ebenezer Henderson, whose pride in his native Dunfermline knew no bounds (although he actually lived in St Helens) was outraged that his town was not considered sufficiently important to be offered a Russian trophy. He successfully lobbied the Government for redress and in 1857 a gun was duly allocated to Dunfermline. Henderson’s efforts were not, however, received with universal enthusiasm. Feelings about the Government’s gift were certainly mixed among the members of Dunfermline Town Council, especially when they discovered that all they had been given was the barrel of the cannon. The town would have to pay for a gun-carriage for it to rest on and its freight from London to the Forth.

Although everyone knew about the gun, and its cost and possible location had been informally discussed, the news was officially broken to the Council by Provost Robertson at a special meeting on Saturday 13 June 1857. The Fife Herald’s report of the meeting reflected the conflicting local opinions about the gun.

The chairmen then stated that through the intervention of Dr Henderson of St Helen’s, Liverpool, the Government were about to honour the burgh of Dunfermline with a Russian gun taken from the Redan. Unhappily it appears that all the mounted Russian guns had already been disposed of and if the Council accepted of this present they would have to supply it with a carriage at their own expense. A gun-carriage, as stated in the letter of Lord Panmure’s Secretary, could be had at the military arsenal of Woolwich – the price of a wrought-iron one being £30 and of a cast iron one £16.

Mr Whitelaw (a local iron-founder) said that so far as he could judge from the photograph of the cast iron carriage, which had been sent along with the Government letter but which wanted a scale of feet, he would say that it would not be overcharged at £16. They would get the Carron Company to bring them down in one of their vessels for nothing. They had done so for the Stirling people and there was no doubt that, considering the trade they had with Dunfermline, the Company would carry them from Woolwich to Charlestown free of charge….he thought the Council should merge all idea of expense and accept the cost of everything – gun, carriage, bringing them down and erecting a proper pedestal for placing them on would come to no more than to between £25 and £30.

Mr Morrison said that in place of £30 it would cost £50 before all was done. He had not the least doubt of it. With regard to giving it a site in the Bowling Green, (ie the Churchyard) that was out of the question. A burying ground was not the place for a trophy of war. The ground was too small already for its legitimate uses, without occupying any of its space with a useless ornament. Besides, the Heritors (local landowners who administered the Churchyard) had to be consulted before they could place it there.

Mr James Morris was totally opposed to spending £50 on the Russian gun. They had more need to apply the sum to the drainage of the town. He did not value the present at all and he was equally against laying out £4 upon it as he was of laying out £50. And where were they to find it? The Council had not a bit of ground for holding such a trophy, except it was the room they were now sitting in (the Council Chamber); and it would not do there either, unless they hung it on the wall like a picture. As for the churchyard, to place it there would be a desecration of its sacred ground and its presence in such a solemn place would do constant violence to the feelings of those who came to mourn over the graves of their friends. Mr Morris would accept of the gun provided they could get it free of expense.

Mr Morrison proposed a motion for delay but withdrew it afterwards. After much debating and sub-debating on the subject, silence and order were at length restored by a witty appeal to their whereabouts from one of the members, when Mr Whitelaw, seconded by Mr Ja Balfour, moved a resolution to this effect – That as there was no site in Dunfermline for a mounted gun, this gun be accepted of but in the same naked condition as it has been offered by the Government. On the votes being taken there were eleven for the motion and three for the amendment.

(A final comment by the writer of the article). At this Council meeting, which began by refusing to grant one single farthing for the construction of a road necessary to the convenience and safety of the inhabitants, wound up the business of the day by voting away £50 of the public funds on an old Russian gun barrel.

The Dunfermline Journal, however, took the opposite view from the Fife Herald:

The town of Dundee stands uniquely ridiculous in refusing the gift of a Russian cannon from the War Office because a carriage to mount it on would cost a few pounds. We are thankful that Dundee is left alone in his shabbiness and that Dunfermline has not to march through Coventry with it. Our cannon will be here soon and the question is – where to place it? On the old Bowling Green undoubtedly. That site forms a bastion-like projection where the trophy could be placed to the very best advantage. There ought to be a bronze plate affixed to the carriage, having inscribed the names of those natives of Dunfermline who fell in the Crimea. The cannon would thus be at once a memorial of victory and a monument to those who died for their country….We are sure after it is erected many will feel grateful to Dr E Henderson for the trouble he has taken in procuring it for us.

Dr Chalmers in his history of Dunfermline published in 1859 was also of the opinion that the town was indebted to Henderson for the gift, but he and the editor of the Dunfermline Journal seem to have been among the minority.

On 23 June this short item appeared in the Herald:

On it being told to one of our Town Councillors, who was absent at the last special meeting of Council, that it was proposed to locate the Russian gun in the playground of the High School, he said – “Wasn’t it curious that Mr B did not try his wit on this proposal and tell them that this was a laudable suggestion, inasmuch as it was teaching the young idea how to shoot”. (A quotation from James Thomson’s poem Spring, which extols the joys of teaching.)

Just over a week later Provost Robertson received a letter from Lord Panmure telling him that orders had been given for the construction of a cast iron carriage for the gun, to be paid for by the Town. Two months later, at the beginning of September, the problem of the site had still not been solved, but the Provost was negotiating with one of the Heritors to have it set up in the churchyard. Opposition to this suggestion and to the placing of it in the School playground was still fierce at the beginning of October, as reported in the hostile Fife Herald:

We understand that this trophy, carriage and all together, is ready for delivery whenever a proper site has been fixed upon. The proposal of placing it in the churchyard is meeting with many objections, partly on account of the want of room, but much more on the impropriety of placing an engine of violence in such a sacred and solemn spot as a churchyard. But the authorities have no other alternative. The only other spot where such a thing could be set up is the play-ground of the High School; and there is as great an objection to familiarising the young mind with an object of violence as it would be to place it where it would seem to outrage ‘the stillness and peace of the grave’.

However, the gun was inexorably on its way and on of 16 December it was unshipped at Charlestown and loaded onto a railway truck which delivered it at the terminus of the Charlestown line, on the west side of Elgin Street about twenty yards north of the Grange Road Bridge over the Lynn Burn. 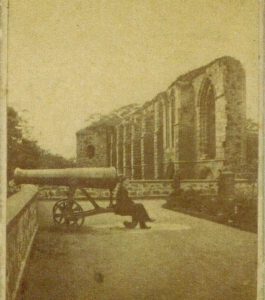 The Gun in situ on the Outshot

….this piece of ordnance was carried by truck from the railway station down through our streets, attended by a numerous crowd of youngsters, and posted into the churchyard through the east gateway. The trophy was, after some difficulty, conveyed to its appointed site on the Bowling Green where it now stands. The gun, nine feet in length, is a dangerous-looking customer; but the carriage is of so rickety a character that a full charge of powder on the Queen’s birthday would shake it to pieces. (Contributed to the Fife Herald by a Dunfermline reporter.)

The gun was placed by the wall of the southward projecting section of the graveyard, then known as the Outshot, lying to the east of the Fratery, an area that was not used for burials until many years later. In 1863 the Public Park was opened and was a far better potential location for the gun, but it was not until 1884 that the Park Committee approached the Heritors for permission to move it:

The Council highly appreciate the kindness of the Heritors in allowing the Gun to be placed in the Burial‑ground, which at the time was perhaps the best site that could have been found. But now that there is a Public Park belonging to the Burgh the Council trust the Heritors will be of the opinion that it is proper the Gun should be removed there.

The Heritors agreed on condition that the Council would pay for any damage caused by the removal of the gun, so to the Public Park it went, where it became a favourite plaything for the children of the town. 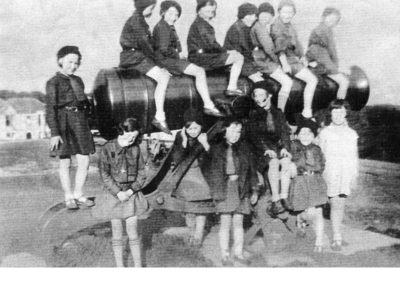 The gun fell victim to the metal salvage sweep during World War 2 and was melted down to make other weapons. Most of the Russian guns throughout Britain suffered the same fate, but a few survivors still stand in their original locations.

The last word on ‘The Russian Gun Standing in the Abbey Grounds’ must go to the local poet Henry Syme.

Auld roostie Rushian gun,
Whaur did yer heroes run
When “Alma Heights” were won,
An’ ye were captured?
We thocht it grandlie done,
An’ were enraptured

Were a’ the widows tash’t an’torn –
The helpless bairnies left forlorn –
The hopefu’ maid o’ husband shorn –
That’s made by thee
Were seen at ance; ‘twad ne’er be borne
By fock that’s free.

Were a’ the toons ye’ve burn’t an’ sacket,
The wives an’ weans ye’ve hasht and hackit,
The kingdoms rent – the kintraes racket
Wi’ sair taxation,
Were brocht tae view, ye’d sune be packet
Frae ilka nation.

From Local Musings by Henry Syme, published 1876 by A Romanes