The previous article on Mrs More’s Seminary for young ladies, which was located in the manse at Cairneyhill, led to an e-mail from a gentleman in New Zealand whose great grandmother was a pupil at the Seminary in the early 1840s.  His great grandmother was called Anne Houeson Neil and she is recorded, at the age of 14, on the 1841 census along with 10 other boarders at the school.  Anne seems to have had very happy memories of her time at Cairneyhill and many of these memories were recorded in later years by her daughter Mary. Before relating some of these happy and poignant memories which give a great insight into Mrs More’s character and the lifestyle of the girls, it would perhaps increase appreciation of them by first giving a bit more information about the school.

The earliest record found for the school is an advertisement in the Fife Herald in 1837 which shows the costs and subjects taught at the school.  As the advertisement below states that the school will re-open in September, it can be assumed it was in existence in 1836. 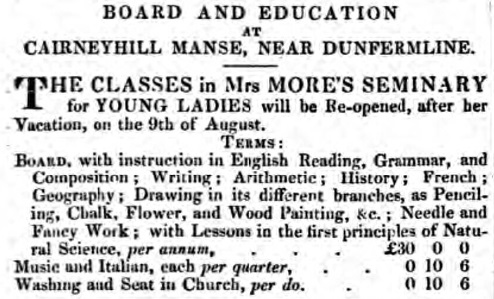 The cost of tuition may not seem, by today’s standards, to be expensive but it needs to be borne in mind that in the 1830s, £30 would be the entire year’s salary for some workers.

Like all schools in Scotland at that time, the Seminary was subject to an annual inspection at the end of the school year by local clergy and councillors.  These inspections were carried out on the last day of the summer term when the pupils would display their skills, and work, to the invited dignitaries.  They were reported in the local newspapers and below is the report from the Fife Herald of 18th July 1839.  It is rather lengthy but, as it gives a good insight into the type of education received by the girls, it is worth reporting in its entirety.

On Monday the 15th instant the seminary for young ladies conducted by Mrs More and daughters was examined by several clergymen, established and dissenting, in the presence of the parents and friends of the pupils.  The exhibition made by the young ladies fully sustained the high character which this seminary has attained for imparting an education not only accomplished, but useful, solid, and enlightened.  The examiners expressed themselves highly pleased with the proficiency of the pupils in history, geography, modern languages &c., with the specimens of essays read on philosophical subjects and especially with their intimate acquaintance with religious truth; in all these departments the young ladies acquitted themselves very creditably.  There was a marked progressive improvement since last year.  Nor were the lighter and more ornamental branches deficient.  The walls were covered with drawings in chalk, pencil and watercolours – some of the latter very exquisite; and there was a profusion of needlework, japanned screens, baskets, &c., all indicating the dominion of a refined and elegant taste.  In the evening a concert of vocal and instrumental music was performed – almost all the young ladies taking part.  Several of the most brilliant compositions of Herz and other masters were gone through with great precision, while the vocal duets and songs gave much delight to all present.  The business of the day was concluded by the Queen’s anthem being sung in full chorus by all assembled.   Some time since we noticed that Mrs and Miss More had presented to them a very handsome silver spice-stand and writing desk. The proceedings of the day testified that the attention and labour bestowed by them on their pupils during year, were reason sufficient for that token of the young ladies’ gratitude and esteem.

“……Not long ago I could always hear tales of my grand parents and great-grand parents and tales of old Edinburgh from my mother but that is all over now. ………….it seemed to me a duty to place if possible these old stories on paper as long as the memory of them is fresh. For there is no one left but me to tell them and one cannot tell how long either memory or life may last.” 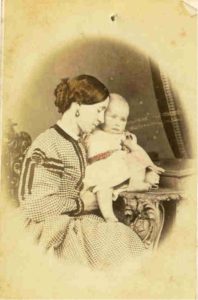 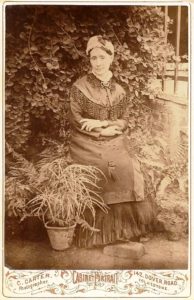 Anne seems to have told her daughter many stories about the goodness and wisdom of Mrs More but Mr More does not seem to have been held in the same high esteem.

“Mrs More, the headmistress was a wonderful woman.  She had a stupid husband and a house full of daughters and the big school besides.  She was bright and merry and let the school girls into her little jokes and withal she was a woman of deep religious feeling and a most earnest Christian.  Her influence on the girls was wonderful and they seemed all to leave her school with the faces turned Zion-ward. To use a slang expression she let the girls have plenty of rope.  Feasts in the dormitories were common and on winter nights the feast consisted of magnificent potatoes boiled to a nicety in their skins and smuggled up in the apron of a good natured maid servant (whose memory was ever after blessed by the girls). Jeannie also brought up a “pickle of salt” screwed up in paper.  Butter was not on the menu, but the potatoes were a most delicious feast. Jeannie’s services were not forgotten when she was married the girls subscribed and gave her a handsome wedding present – a tea set I think it was.  Probably Mrs More knew of these stolen feastings and smiled the smile of a wise woman.”

Times have certainly changed.  Would modern teenagers see boiled potatoes with a little salt as “a delicious feast”?

Parts of these memories read like the pages of a Victorian novel and show the girls and their mentors were not without a sense of humour.

“On Sunday the girls of course attended the UP Church of which Mr More was minister.  He was the dullest and driest of preachers and stupid as his wife was clever.  The girls all sat in a long front pew across the front of the church and made the best of it……………One Sunday the girls had an awful experience. Janet Blackadder an old pupil came to spend the weekend with her dear old school mistress.  She sat with girls at the very end of the front pew.  Then in the midst of the sermon she inserted an enormous pepper mint lozenge in her eye – like an eye-glass and leant against the book board with her hand upon the pulpit side and looked down the row of girls.  The effect was instantaneous, a big giggle and suppressed laughing ran down the school pew.  Mr More stopped in his sermon said severely “I see conduct in the front pew which I hope will not be repeated”.  Mrs More from her seat said “Tuts Mr More”.  The other occasion where Mrs More said “Tuts Mr More” in church was on a certain occasion where her daughter Mary was newly engaged and was seated in church with her fiancé whose name happened to be Joseph.  The sermon was on the annunciation and when he came to the passage about Joseph and Mary his espoused wife, he said with a look at the young couple “Joseph and Mary were espoused that is to say engaged” . An indignant “Tuts Mr More” was audible from the manse pew, but evidently the good minister liked a little joke.” 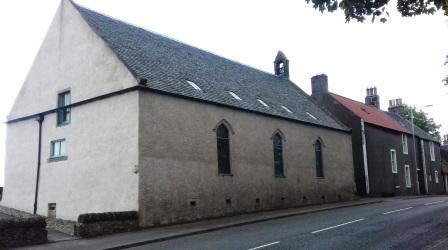 The long pews referred to above (which dated from the 1770’s) have now been replaced by a more modern and comfortable design but the original pews are still in storage on the upper floor of the church.

While Anne was a pupil at the seminary, her three closest friends were Jeannie, Isabella and Janet Beveridge.  These girls, who became life long friends of Anne, were weekly boarders at the school and their home was Urquhart farm which is only a few miles away.  The girls were motherless and lived at the farm with their father and two brothers, James and William.  Anne had fond memories of summer picnics with the Beveridge girls at Urquhart.  These summer picnics were attended by many local people and one of these was a young artist who did “pretty pen and ink sketches for the girls“.  This young man was better known in later years as Sir Noel Paton and some of the people in his sketches are immortalised in one of his paintings called “The Pursuit of Pleasure “

“My mother has told me figure by figure who the allegorical people in the picture were modelled from.  They were picnic girls and men of Urquhart and neighbourhood – immortalised by the magic of a great artist.” 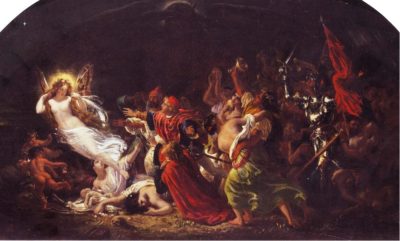 Unfortunately, Mary did not record the names of the people who were the models for the allegorical figures but perhaps “Pleasure” (the lady with the wings) was modelled on one of the Beveridge girls!

Anne’s schooldays came to an abrupt end when she was sixteen as her grandmother was dying and she had to return to her home in Edinburgh. On leaving the Seminary Mrs More gifted to Anne a bible bound in mother of pearl and underneath the inscription on the title page is written “the best gift”.

Anne’s early life was touched by sadness and losses.  Around 1832, when Anne was about 6 years old, she lost her mother and two siblings and 5 years later she lost another brother leaving only her father and one brother. They all lived with her grandparents in Edinburgh. The year she left Cairneyhill Seminary her grandmother died and both her father and grandfather remarried.  Anne went to live with her uncles.  Amongst all this sadness and upheaval in Anne’s life it is hardly surprising that she had such fond memories of the time spent at Cairneyhill.  However, in 1858 Anne married John Tod, who was a ship’s master, and they lived for a time in Dysart.  They had two sons, Robert and William and of course a daughter, Mary, who recorded her mother’s memories.   In 1872 the family moved to London and in 1891 Mary was sent, for health reasons, to New Zealand to live with her uncles (Tod) who were farmers.  Mary married James Woodhouse Bibby in New Zealand and remained there for the remainder of her life (she died in 1937). 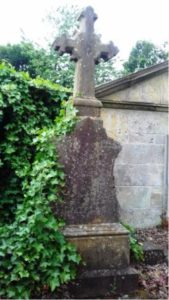 Her descendants still live in New Zealand and thanks are due to one of her grandsons, Hugh Bibby, for the information he has provided about Anne’s time at Cairneyhill Seminary.

Finally, something must be said about what happened to the Rev and Mrs More.  Mrs Jane More (nee Paxton) died in 1866, at the manse, at the age of 74 and her husband, John, died 2 years later at the age of 80 also at the Cairneyhill Manse.  They are buried together in the church graveyard which is located behind the church and manse.  Their tombstone is located in a quiet corner of the graveyard. Unfortunately, 150 years of Scottish weather has left the inscription on the headstone almost unreadable but the Mores of Cairneyhill Manse have not been forgotten.