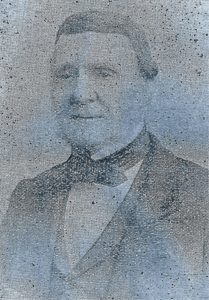 John McChlery, from a photograph by James Norval, Dunfermline

In the second half of the nineteenth century the residents of Dunfermline would have been familiar with the name of John McChlery but like many of our esteemed citizens of the past his name is now unknown.

John McChlery was born in 1820 in Stonykirk, Wigtownshire the son of a farmer.  From an early age John had decided to become a teacher. In the 1840’s he entered the Church of Scotland Training College in Glasgow and also attended Glasgow University. In 1848 he gained his teacher’s certificate and in the same year a vacancy occurred for a headmaster of the McLean school in Dunfermline and thus started John McChlery’s 37 year career as the head of the McLean school.  With the passing of the years, the people of Dunfermline frequently referred to the school as the Golfdrum School or ‘McChlery’s School’.

The present McLean School, which is located in Baldridgeburn, Dunfermline was opened in 1896.  The original school building however, was in Golfdrum Street next to the North Parish Church.  When the Rev Allan McLean, who was minister at the Abbey Church, died in 1836 he left a bequest to build a school “to provide education at a low fee for the children of the working and poorer classes of the town and parish of Dunfermline and particularly of those residing in the suburbs of the town.”  The suburbs at that time consisted of the area to the north and west of Bridge Street and Damside Street reaching as far as Beveridgewell.  According to the Historical and Statistical Account of Dunfermline (Volume 1) by the Rev Peter Chalmers, the school was built in 1842 at a cost of £1,144.  The Trustees of the Rev McLean’s estate paid £777 and the remaining £367 came from a government grant. 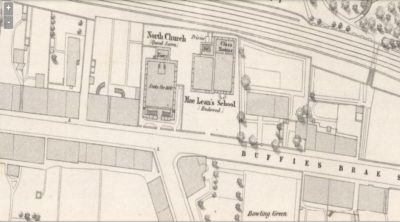 When John McChlery was starting his teaching career, education was neither free nor compulsory.  However, the majority of children received some sort of education.  According to Ebenezer Henderson’s Annals of Dunfermline, in 1842 there were 33 schools in Dunfermline parish with 2,200 scholars in attendance (1,200 boys and 1,000 girls).  These schools varied in size and in the quality of education provided but just like the present day, parents would send their children, whenever possible, to the schools with the best reputation. This resulted in some schools having several hundred pupils.  By 1858, the Golfdrum school was the largest in Dunfermline.  The following is a list of the largest schools by pupil numbers according to the Rev Chalmers in his Historical and Statistical Account of Dunfermline (Volume I): 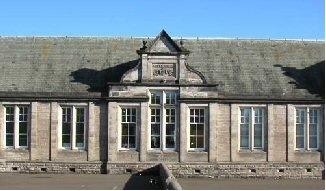 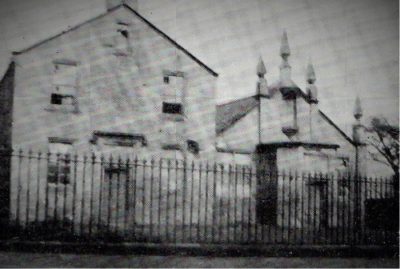 As was stated above the objective of the legacy left by the Rev McLean was to provide education at a low fee for children from poorer homes. According to the Rev Chalmers in Volume I of his Statistical and Historical Account of Dunfermline, the fees for the school were as follows: 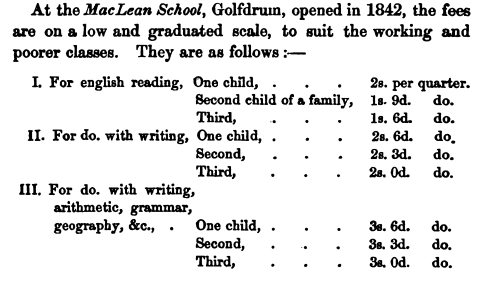 Robert Syme Mackie in ‘When we were Boys’ states that the fees for the ‘wee skool’ which was under the supervision of Miss McIntyre (Mrs McChlery’s aunt) assisted by one or two pupil teachers were lower than those of the ‘big skool’ which taught the older children and was under the headmaster’s care with the assistance of 2 or 3 pupil teachers.  The fee charged was supplemented by 4d or 6d at the beginning of the winter as coal money.

By modern standards we would find this stigmatising of poor children upsetting but political correctness was a long way off. Other than the success of the McLean School in attracting pupils there is a great deal of information in newspaper reports on the ability of John McChlery as a successful head teacher.  Each summer, just before the schools broke up for the summer holidays, an inspection of the pupils took place. These inspections which were carried out by local ministers and councillors would be reported in the local press.  Below are some extracts from the Dunfermline Saturday Press:

“……..The Rev Mr Pryde then said – I have great pleasure in corroborating the statements which have just been made by Mr French regarding the efficiency of this school. It is needless for me to single out any class, or any branch of instruction, as better than another; for every one who has witnessed the examination today must be impressed with the general excellency of the whole proceedings. There is one point however, which is deserving of notice and that is the equality of attainments of each class.  There are not here as there are in many schools a few at the top of each division who answer most of the questions and a few at the other end who answer none at all. Mr McChlery has succeeded in imparting a considerable amount of instruction to all the children under his care, and in so doing he has achieved a victory which many labour long, but often unsuccessfully, to gain. It seems to me, my young friends, that you may be very thankful that it has been your lot to be placed under so efficient teachers as you have here.”

” …….. The Rev Mr French said it gave him great pleasure to have that opportunity of congratulating Mr McChlery and Miss McIntyre on the prosperous condition of the school.  Mr McChlery had got the school, he might say, almost entirely empty. The numbers had dwindled down to nothing, but by his exertion, he had brought the school to its present prosperous condition – numbering nearly 400. He never saw the school in a better state. All the exercises had been done well. Parents might have every confidence in sending their children to the school; and he hoped the teachers, Mr McChlery and Miss McIntyre might be long spared.”

The school was also famed for the training given to those entering the teaching profession.  According to John McChlery’s obituary in D Thomson’s ‘Anent Dunfermline’, it was possible to name a dozen old McLean School pupils who were filling the position of headmasters in Scotland.  Three old pupils were headmasters in Dunfermline – Mr C McChlery, McLean New School (John’s eldest son), Mr W Beveridge, Commercial School and Mr Paton of Pittencrieff School.

Of course John McChlery had a life outside of the classroom.  He was a founder member of the North Bowling Club and throughout the 1860’s there are reports in the press of his prowess in bowling competitions.  He was also involved with the North Parish Church as an elder and Session Clerk.  When, in 1866, he resigned as Treasurer of the church an article appeared in the Dunfermline Saturday Press. The article is fairly lengthy but due to the insight it gives into the high regard with which John McChlery was held, part of it is reproduced below:

“……..On the Rev Charles Rogers, late of Stirling, being placed over the Church, Mr McChlery at once came forward, and under his influence, and by his exertions, the North Church became a congregation and was endowed in 1856.  Evening schools were begun in McLean Place and gratuitously conducted by Mr McChlery and an able staff of assistants.  Nor was this all; clothing was provided for many poor persons, who were then enabled to go to church and in the North Church these got their sittings free. The North Church has never attained any great degree of strength as a congregation but certainly the church owes its present prosperity to the assiduity and life-long services of a gentleman, whose worth is felt and appreciated by hundreds of residents in Woodhead Street and the suburbs and who will not so soon forget the influence and kindness of the rector of the McLean Schools…..” 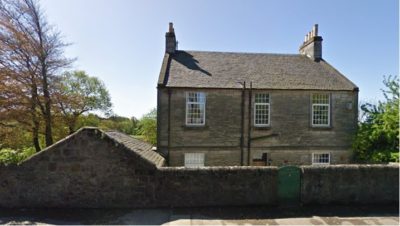 In 1871 John McChlery left the North Parish Church and joined the Abbey Church where before long he became Session Clerk.  He resigned this position in 1885 when he retired from the McLean School and moved to Muirhouse which can still be seen on the Carnock Road.   After the passing of the Education Act in 1872, the school continued on the old lines and under the old management but in 1884 a scheme was adopted by which the buildings became the property of Dunfermline Burgh School Board and at the end of the school year 1885, Mr McChlery retired and was awarded a pension of £65 per year.  On his death in 1898, this money became part of the bursary fund at Dunfermline High School.

In the 1891 Census, while residing at Muirhouse, Mr McChlery states his occupation as ‘Retired schoolteacher now gardening’. In 1855 John McChlery married Lilias Scott in the North Parish Church, Dunfermline and they had 11 children.   However, during their 43 years of marriage, John and Lilias suffered sadness and heartbreak as they were pre-deceased by 7 of their children.  The death certificates of the children show a variety of causes of death including whooping cough, bronchitis, hydrocephalus and meningitis. When John died in 1898 from heart failure he was survived by his wife, a son and three daughters – 2 of his daughters were in Australia.

John McChlery’s tombstone can be seen in the Abbey churchyard in front of St Margaret’s shrine. 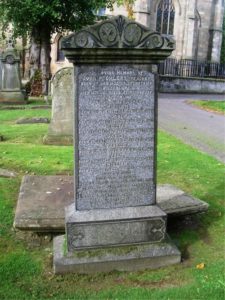