“A TALE OF TWO HOUSES”

For our Spring day outing, Society members headed South over the River Forth on a chilly Saturday morning to visit one of Scotland’s finest stately homes, Hopetoun House , close to South Queensferry.  On arrival, we were greeted with the sight of a flock of black St Kilda sheep.  Originally designed by Sir William Bruce (of Holyrood Palace and Kinross House repute) in 1699, it has been the home of the Hope family ever since.  Grand extensions were made by William Adam from 1721, and considered to be his greatest masterpiece, but only completed by his two sons, Robert and John in 1767, some 46 years later!  During our guided tour we were able to see the original Bruce rooms, with their oak wood panelling and plain plaster ceilings, and contrast these with the grandeur of the gilded rococo style three State Apartments from the mid-18th Century.  Our guide took us through a quick canter of the history of the 11 generations of the Earls of Hopetoun, many of whom had played an active part in Scottish, and later British, historical events.  After a light lunch in the converted stables tearoom, time allowed for a quick stroll through the Spring garden, alive with daffodils.

Please scan through the slideshows.

Travelling west in the afternoon, we arrived at Kinneil House on the outskirts of Bo’ness.  In direct contrast to Hopetoun, behind the imposing façade lies an empty shell. In the 1930’s it was saved from the demolition ball (in the nick of time) when two magnificent painted rooms from Scotland’s early Renaissance were discovered.  For centuries, Kinneil was home to the Dukes of Hamilton and their early tower house was started in 1474.  It was James Hamilton, 2nd Earl of Arran and Regent to the young Mary Queen of Scots (and heir to Scotland’s throne in the event of her early death) who added the surviving East Wing containing these two gems.  The whole building was further developed in the late 17th Century to what we see today.  Viewing the interior of the House is only possible on special open days organised by The Friends of Kinneil . From our volunteer guides we learnt the name Kinneil means “Walls End” and the eastern end of the turf and stone Antonine Wall, the Roman Empire’s northern frontier and World Heritage Site, runs through the estate.  There is even a Roman fortlet to visit.  The surrounding park features the remains of Kinneil’s medieval church and graveyard, and we were able to see the cottage where inventor James Watt worked to develop an improved steam engine.  As 2016 is the Year of Innovation, Architecture and Design we were treated to a talk by a costumed James Watt himself!  The 2000 year story of the estate is told in the local Kinneil Museum. 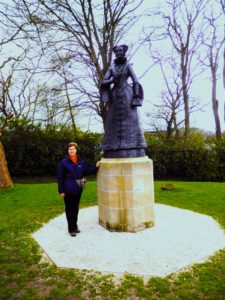 Lindsey and the Statue of Mary Queen of Scots

Our day concluded in Linlithgow with a quick viewing of the recently erected statue of Mary Queen of Scots in the Palace grounds.  Commissioned by the Marie Stuart Society, and unveiled in 2015, the life-size statue was designed by Anne Davidson. Sadly, following her death, it was cast in bronze by renowned Scottish sculptor David Annand.  The only statue of this tragic Queen in the public domain, she now stands proudly overlooking the place of her birth on December 8th 1542.

Although we had not travelled far from our home base, the day proved very enlightening and enjoyable for all involved.

Thanks to Robin Thompson, Martin Tarr, George Robertson and Pamela Macleod for the photos.