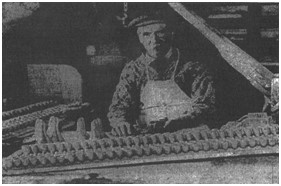 Henry Richmond at work in his James Place premises c.1936

In October 1937, an article in the Dunfermline Press saw Henry Richmond repudiate a press claim, in another newspaper, that a Mr William Stewart, who had died the previous week in Cupar, was the last clay pipe manufacturer in Fife.   Henry, who was the son of William Richmond, went on to explain that although he now ran the Dunfermline business on his own, he had at one time around the turn of the century employed five men, turning out some 240 gross of clay pipes a week.   He recalled how he often went around the district with his father’s horse drawn lorry heavily laden with nothing but clay pipes. Henry admitted that, as a result of the increased popularity of cigarettes and the introduction to the market of cheaper ‘briars’, the vogue of the clay pipe had suffered a drastic set-back in recent years. However, he still did good business with the coal miners of Fife, who still preferred their clay ‘cutties’.

Moulds, of malleable iron, for producing clay pipes in a number of shapes and designs cost a guinea or more in Henry’s younger days, but by the 1930s he only had six in use. The manufacture of one clay pipe was the result of eight different processes, all carried out by hand. 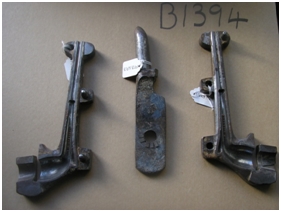 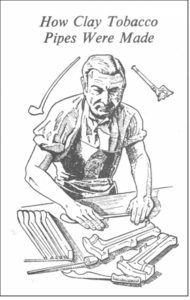 Sketch of a clay-pipe maker at work

Henry remembered a range of pipes made at the factory included the Gardener, a pipe made in a variety of styles personalised for the different lodges of the Free Gardeners, or ancient Society of Gardeners. The right side of the bowl of these pipes (as held in the smoker’s mouth) generally had a Masonic compass, set square and pruning knife, with the left side having a design or inscription referring to the particular lodge, e.g. Palm Bowhill, Vine Blairadam, Thistle Beath, Lily of the Valley, Crossgates, or just inscribed ‘Free Gardeners’. Another favourite around the turn of the century was the ‘Buller’, a pipe which commemorated General Buller embarking for South Africa at the head of 7000 men for the Boer War in October, 1899. Buller’s successor, Field Marshall ‘Bobs’ Roberts and Baden Powell also had clay pipes named after them. There was also a boom time for Richmond’s pipes when the Forth Rail Bridge (1882 – 1890) was being built. The navvies working on the bridge smoked ‘cutties’, and their pipes were named after the bridge, just for them.

Coal miners called their clay pipes ‘jaw warmers’ – they could hold the bowl of the pipe against their jaw for a quick warm up. The miners continued to smoke their pipes (not underground of course) even when the stem had broken off to an inch or so of the bowl. Henry was adamant that he could always tell a hard smoker by his teeth, as four on one side of his face would be worn away by holding a ‘cutty’ clay pipe. He made one of ‘soft’ clay for those who preferred it.

The company was founded by William Richmond, who was born at New Lanark circa 1832. In 1853, when he married Isabella Henderson, William was working as a tobacco pipe maker and residing at Back of Vaults, Leith. Isabella’s father, John Henderson, was also a tobacco pipe maker in Edinburgh, and it is possible that William either worked with, or for, Mr Henderson.

William and Isabella had three children born in Edinburgh, all at the quaintly named ‘Big Jack’s Close’, 225 Canongate, Edinburgh. The registration of the birth of the third born, William, on 25th November, 1859, indicates that, although he was born at Big Jack’s Close, his father was then residing at New Row Street, Dunfermline. This is the best clue that William Snr moved to Dunfermline around 1858/59 and probably began manufacturing clay pipes in the town at that time. The census record of 1861 shows William, his wife Isabella, and children, John, Marion and William, all residing at New Row Street, with William Snr. designated as a tobacco pipe maker, employing one boy.

During the ensuing years Richmond’s business must have moved from New Row to James Street, and then to Pittencrieff Street. A notice in the Dunfermline Press of 25th June, 1870, states:- ‘William Richmond, Tobacco Pipe Manufacturer, in thanking the inhabitants of Dunfermline and surrounding district for their patronage over the last 13 years, begs to intimate that he has moved from James Street to Pittencrieff Street, where he will carry on his business as formerly. – Dunfermline 24th June, 1870.

In the 1881 census the Richmond family are shown as residing at 95 Pittencrieff Street, with a further five children having been born since the move to Dunfermline. By that time the business had become a real family concern with William Snr. designated a tobacco pipe manufacturer employing two men and one woman. These are probably family members as son John, then 26, is shown as a pipe maker; daughters Marion, (24), and Isabella, (15), both pipe trimmers; and son William, (21), a part-time hour worker.

It is probable that by 1881 the Richmond business premises had moved to James Place, Dunfermline. James Place (later to be incorporated into Pittencrieff Street) then extended west from the junction of Pittencrieff Street, William Street and Coal Road, almost to the top of Urquhart Cut. It would appear that the business was located on the south side of James Place, at its extreme westerly end, possibly the premises later used as storage units by Souness, the iron-monger, and now the site of a new housing development. 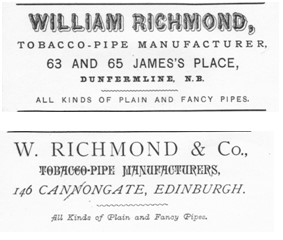 The above adverts appeared in the Fife Trades Directory of 1888-89, the lower of which probably relates to Mr Richmond’s father’s business in Canongate, Edinburgh

A notice in the Dunfermline Press of 10th January, 1885, states:- “William Richmond, Tobacco Pipe Manufacturer, James Place, Dunfermline, begs to thank his numerous customers in the town and district for the confidence they have placed in him for the past 28 years, and at the same time has much pleasure in intimating that, for their convenience, he has taken those premises at 31 Chalmers Street, lately occupied by Thos. Keir, Painter, which he will use as a store and shop for all kinds of his manufactures, and where orders will be received and executed with the same despatch as heretofore.   If closed, orders can be left at 39 Chalmers Street.” It is likely that, as indicated, the Chalmers Street premises was used merely as an outlet for the convenience of the public, with the factory remaining at James Place.

In the 1901 census the Richmond family are residing at 75 James Place, Dunfermline, with William, then 69 years, still designated as a clay tobacco pipe manufacturer and an employer. He was still supported by family members with son, John, (46), a clay pipe maker, and daughters Isabella and Christina, both clay pipe trimmers.   A further son, Henry, who would take over the running of the business, was also working for the firm at that time.

William Richmond Snr. died in May 1908, by which time his sons William Jnr. and Henry were running the business. According to Dunfermline Trade Directories this situation continued until about 1912, after which only Henry is mentioned. Henry continued to successfully run the business until his death in June, 1942, at the age of 73, although by that time the demand for clay pipes had greatly decreased.

Richmond’s Clay Pipe Works closed following the death of Henry in 1942, having survived in the town for some 85 years.