Etching of Adam Smith. The original depiction was created in 1787 by James Tassie.

that Adam Smith is said to have shocked the good citizens of Dunfermline on the Sabbath?

In his Annals of Dunfermline (1878) under the title ‘Adam Smith, the Kirkcaldy Philosopher, enters Dunfermline in Deshabille’, Ebenezer Henderson gives an account which shows the eminent scholar in an unusual light.  It was reported in a Manuscript Note that, on the 2nd of September 1774, ‘Some Sabbaths since, as the third bell was beginning to ring for the forenoon’s sermon, a stranger man appeared in a reverie on the street in Dunfermline, having on him his small cloathes, a morning gown, and cap, which astonished every one that saw him.  He by the ringing of the bells began to rouse up, and was as much astonished at himself as other folks were.  It turned out that his name was Mr. Smith, the Kirkcaldy philosopher, who, in pursuing some severe train of thought for a book he was to publish, had left Kirkcaldy early in the morning, westward, following his train of thought, and so walked in a half unconscious state to all around, until he got into the streets of Dunfermline, when he was roused out of his reverie by the bells beginning to ring’.  Henderson adds, ‘This was the celebrated Dr. Adam Smith, and the book he was so concerned with was The Wealth of Nations which was published in 1776′. 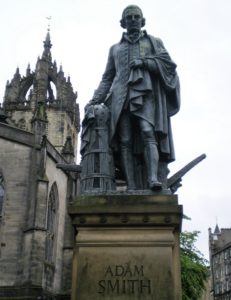 Adam Smith was born in Kirkcaldy in 1723 and died at Panmure House, Edinburgh, in 1790.  Educated in Kirkcaldy, Glasgow and Oxford, Smith’s early career included public lecturing in Edinburgh and a professorship at the University of Glasgow, where he taught logic, ethics, jurisprudence and political economy.  In 1759 he published his The Theory of Moral Sentiments based on his Glasgow lectures and in 1762 the University conferred on him the title of Doctor of Laws (LL.D).  In 1763 Smith took up the lucrative position of tutor to the young Duke of Buccleuch with whom he toured Europe, meeting Voltaire, Benjamin Franklin and other leading political and intellectual figures of the day.  Buccleuch family affairs brought the travellers home and, back in Kirkcaldy living with his mother to whom he was devoted, Smith decided to devote his time to working on his magnum opus of political economy, An Enquiry into the Nature and Causes of the Wealth of Nations, known simply as The Wealth of Nations.  While he never ceased to write, in 1778 Smith became a Commissioner of Customs and spent the rest of his life in Edinburgh with his mother.  Outliving her, he died at his home, Panmure House, on July 17th 1790.  He is buried in Canongate Churchyard and his imposing statue stands outside St. Giles Church.

By his own admission, Adam Smith was an odd-looking chap with eccentric ways.  He had a large nose, bulging eyes, a protruding lower lip, a nervous twitch and a speech impediment. It is perhaps unsurprising then that he was a known hypochondriac. He had a brilliant and logical mind and was a good-natured fellow, but was comically absent minded, talked to himself, seemed oblivious of other people and marched about Edinburgh with his cane over his shoulder like a musket. 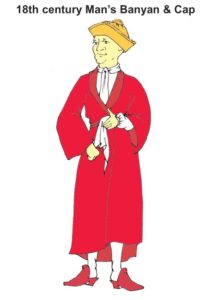 In his Leaves from my Autobiography of 1876 (pp. 84-5) the Rev. Charles Rogers gives a similar account of the above event, which he heard from Kirkcaldy acquaintances said to have been there at the time. Dr. Rogers claims that Smith was meditating in his garden (which went from the High Street in Kirkcaldy down to the sea) when he wandered from the garden path, on to the main street and then on to the turnpike to Dunfermline.  What he was wearing seem to have consisted of linen drawers or small cloathes, covered (fortunately) by a `banyan` or dressing-gown popular at the time, a pointed nightcap, and some sort of slippers on his feet.  Smith`s known absent-mindedness adds an authentic touch to this story of how he forgot himself enough to startle the good folks of Dunfermline as they made their way to the Kirk but all the same it must have been some reverie!