The Tramp and the Minister’s Dinner

about Frank the tramp who stole the minister`s dinner?

In the 18th century Scotland, when the population was only between one and two millions, hundreds of beggars wandered the roads. A few were privileged `blue gown` beggars under Royal protection but most were poor people with no work and no support. They would carry their meal pock containing oatmeal and other scraps they had picked up and counted themselves lucky if at certain houses they got something to eat and drink and a bed in a barn or garret. Beggars were sometimes welcomed for the news they carried to isolated spots and might even be entrusted to carry messages, but more often than not they were regarded as a nuisance and their increasing numbers alarmed the authorities.

Acts of Parliament made an attempt to control the poor and in March 1777 the Sheriff of Fife in Cupar ordered the Dunfermline Kirk Session, who were responsible for poor relief, to return a list of their `begging poor` and what they proposed to do about them. Of their list of about 50 poor, the Session decided to continue to maintain in their homes `those who did not beg from door to door but staid at home and wrought and spun as they were able` and to issue the others with badges to be sewn into their clothing which allowed them to beg through the town and parish. These metal badges were circular and had stamped on them a number or a name, date and round the border `The Town and Parish of Dunfermline`. Typical of the people requesting a badge was Robert Morris, aged 79, who been a flax dresser in Dunfermline for many years but was now unable to work. 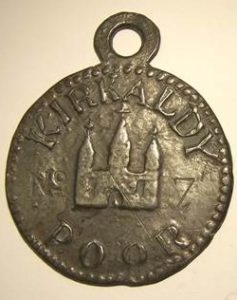 An 18th C. Beggars Badge, from Kirkcaldy not Dunfermline

Apart from these respectable folk who took to the road from sheer necessity, there were some tramps who seemed to like the life. One such was Francis Weir, a well-known local character, who was based at Berrylaw, but was more often on the road, selling heather besoms but also begging along the way and poaching where he could. Jenny Reid, a local writer of doggerel verses about `Dunfermline notables` mentions Frank Weir and his `cutty gun` talking to Lady Dury. Whether or not Frank wore a badge is not known but in Reminiscences of Dunfermline, published in 1886 but covering events of 60 years earlier, Alexander Stewart tells us that Frank did not beg from door to door but went to places where he knew he might find hospitality be it `a cog o` porridge` or `a bowlful o` kail` with a bit of bread and hopefully some ale.

At about 60 years of age, Frank was a strange looking figure, tall, dark-skinned, bearded, shaggy-haired and wearing a long coat or cloak. He was a bit of a wit and not averse to amusing the gentry with whom he was something of a favourite. Having been told to `go to hell` by Sir Charles Halket of Pitfirrane in a bad humour, and some time afterwards being asked by a calmer Sir Charles what people were doing there, Frank answered `They were just doin` there what they are doin` here; they were takin` in the rich folk an` keeping` oot the puir`! When Frank was imprisoned in the jail at the Tolbooth in October 1792, the Heritors (local landowners) asked the Kirk Session to provide Frank with some `aliment` or maintenance in prison. This the Session refused to do stating that they had enough to do to support the aged, infirm and necessitous people on their rolls without supporting the likes of Francis Weir or any in such circumstances.

There are at least two accounts of Frank Weir stealing the Minister`s dinner, perhaps he did it twice. In `Dunfermline as it was and is` in the Dunfermline Saturday Press of March 22nd 1860, the writer mentions that the Rev. Thomson of the Abbey occupied the house next to the Townhouse or Tolbooth where the jail was and goes on to say that `In the days when George the Third was King and Francis Weir of Berrylaw was a young man, the said Francis was consigned to durance for poaching in Pitfirrane Dean and broke through from the staircase of the jail into Mr. Thomson`s. It happened on a Monday at the Sacrament and, as was wont in the older times, the table was plenteously furnished with `baked meats` for the refreshment of the minister and his assistants. The servant girl happening to enter the apartment found Frank busy demolishing a pie, whom he coolly addressed with `tell Mr. Tamson, lassie, he keeps a good meat-house, but he`s unco scrimpit with the drink“.

The second anecdote is slightly different. According to Alexander Stewart, one day looking through a window Frank Weir saw the minister`s dinner nicely laid out and, sorely tempted, decided to go down the chimney and enjoy it himself. Covered with soot, with his long black hair and beard even blacker, he was quietly enjoying his meal when the maid servant came into the room. She ran out screaming `Murder`! and, coming to herself a bit, told the alarmed household that `The deevil was sittin` ben the hoose eatin` the minister`s dinner`.

Frank Weir seems to have been a likeable rogue and whatever sort of life he led it turned out to be a long one as he is recorded as dying of `old age` in December 1834 when he was 86 years old. Many other `begging poor` who were probably much more virtuous were not half as fortunate.