The ‘Pernicious’ Society of Dunfermline Wheepmen

…about the Pernicious Society of Dunfermline Wheepmen?

In May 1735 Bailly John Lindsay, maltster of Dunfermline, was a worried man.  As First Baillie of the Town Council he deputised for the Provost, the Marques of Tweeddale, who was rarely present, and he had had nothing but trouble. There was rivalry for the provostship between the Marques and Sir Peter Halkett, who had been elected provost in 1705, and a power struggle between the Halkett family and James Erskine of Grange, leading to vociferous arguments between councillors from the various camps.  Erskine had been chosen in May 1734 to represent the Council at the election of the Member of Parliament for the district and the Halketts hinted at bribery, corruption and leading the councillors astray.

There was also a legal dispute underway between the Council and Sir Alexander Murray of Melgum and Lochgelly for an unpaid family debt which seemed to have been going on for ever, and in addition Bailly Lindsay was preoccupied with building a new malt barn north of the Rottenraw, near the Rottenraw port. Now on Tuesday, May 6th the servants or workers of the town were refusing to work and Bailly Lindsay felt obliged to call a special meeting. It appeared that there had been a fracas, between the weavers and the servants, and each side had summoned the other before the Baillie or Magistrates Court.

Lindsay reported to council that `several of ye servants in ye Town` had been convicted and imprisoned yesterday for some riotous practices committed by them on Saturday last and `the rest of the men servants in the Burgh had agreed not to obey their masters or work to them oyr in making of ye malt or labouring of ye ground for ye bearseed.`  Lindsay`s own servants refused to go to work that afternoon `unless their neighbours, as they call them, are set at liberty from prison` and he was further informed that `the servant men in ye town are joined together in a Society whom they call the Wheep men`.

On consideration, council thought fit to call for William Gib, servant to James Anderson, wright, who is said to be `ye Lord of ye Wheep men`. Gib acknowledged that they `were entered into a society and yt he was chosen Lord and had been so ever since last Halvermas, that James Wardlaw was deacon and Thomas Fisher, servant to Robert Wilson brewer, thesaurer or boxmaster`. 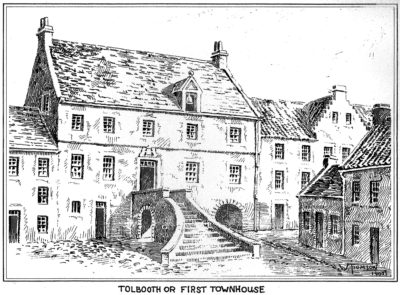 James Wardlaw was called and, on being asked `why he refused to obey his master & go about his work`, answered `he would not until their Comrads were let out of prison and because they had not got right Justice`.  Asked why `several of ym had met in ye tollbooth`, answered that `their officer John Hamilton, servant to John Kirk, wright, came to ym at ye plough and warned them to meet at ye foot of ye gate or tollbooth  to see if fair play was done to their people, who had summoned some of ye weavers before ye Baillies, and that they, with other Comrads, stayed in ye tollbooth after the Court and laid down a resolution not to work until their comrads should be let out`.

Thereafter David Wilson, merchant, asked William Gib why `all the eight wheepmen in the tollbooth had not refused to work` and Gib asked in turn `who bade you spear such a question?`Council called John Hamilton, who acknowledged that the Wheepmen were entered into a society, and that he as officer summoned William Gib and James Wardlaw to `meet at ye foot of ye gate to see what the Court did about ye Comrad`s process against ye weavers`, and that Michell Henderson and James Duncanson, burgess ordered him to summon` the heall wheepmen to meet as above said which he accordingly did under ye pain of a shilling sterling each`.

Michell Henderson, burgess & militia man, was called and, `interrogat if he was joined in ye society of ye wheepmen`, answered that `he was and acknowledged the names of the leaders`.

Council questioned Henderson and Duncanson together as to whether they gave orders to James Hamilton to `summon ye wheepmen to meet at the Court this day`.  Duncanson denied this whereupon Henderson asked him `did not you say to Hamilton `go and warn ye Lads“ and that he, Henderson, had said `No, only tell William Gib to come and speak and give ye Lads in ye tollbooth a chapin of ale and see fair play done`.  He added that there were about 20 of `ye wheepmen met in ye Tolbooth who generally had agreed not to work to ye masters till ye comrads were let out`. Thereafter Michell Henderson declared before ye Council he would `stay by yt society yet and not deny ye Lads`.

Dougall Chapman, burgess and shoemaker, was called and, asked if he was joined in the Society, said that he was and that William Gib was their Lord and James Wardlaw Deacon but he would not tell the name of the Thesaurer.  Asked what was `ye design of the wheepmen meeting this day`, he answered `Because they were wrongeously fyned and that they had agreed to work none to yr masters until their brethren were let out`.  He added that `you should take care of your hands for it`s no done yet and if the Council will meddle with our society they would carry it to a higher Judge`.

Council having spent much time in examining the foresaid persons thought fit to delay the consideration of some proper measures for crushing `so pernicious a society` till their next meeting.

On May 10 1735, it was recorded that `Councill orders the Lord, Deacon & Boxmaster and Thomas Wilson, merchant, Clerk to ye Society of Whipmen, to be summoned to attend the Councill`s next meeting`, but here the matter seems to have ended. 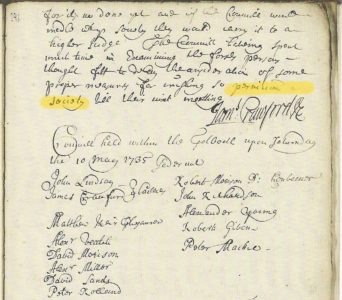 Extract from the Dunfermline Burgh Council Minutes, kind permission of the National Records of Scotland

This may have been because the Council simply thought it not worth pursuing or because the English laws against joining together into `combinations` dated from before the Union of 1707 were not generally applied in Scotland.  Combinations were feared and outlawed because they might become a vehicle for demanding better wages and working conditions rather than, like friendly societies, focussing on the mutual support of members in times of hardship. Sometimes the line between the two was not clear.

This disturbance arose just at the time when many farm servants liked to leave their masters to work for better wages at cutting turf, making dykes, and other summer jobs for different employers, including the council, and those bound for a year were not free to do this. But that was probably just coincidence rather than design.

Dunfermline`s Society of Wheepmen may be unique.  A wheepman or a whipman could be a ploughman or a carter, but in this case the former is most likely as carts were not widely used. Sir John Sinclair, writing in the 1790s of agriculture in Scotland, noted that `the use of carts has only in late years been introduced into this country and they are as yet far from being generally used as every good farmer would wish`. The whipmen for whom the society was named probably worked the land for maltsters like Bailly Lindsay, as some were busy ploughing to sow barley when they were called.

There had always been riots of working people for redress of grievances – and the Riot Act was passed in 1715 against such tumult – but the whipmen`s rebellious behaviour seems unusual, certainly for Dunfermline at this time.  It would be interesting to know what made them join together and then to act in an organised way.The whipmen must have felt that the time had come for them to organise themselves to protect their interests as others did. They apparently had differences with the weavers, but it may have been to the Corporation of Weavers and the other seven trade crofts that they turned for examples of support in times of unemployment, sickness and death. With their deacon and boxmaster, the whipmen`s set-up was similar to theirs but the corporations did not have a `lord` and were strictly only for skilled craftsmen and apprentices of the named trade, whereas the whipmen accepted men who did other work. The Whipmen could also learn from the Society of Gardeners, first recorded in 1716 which, although originally for gardeners, soon accepted not only other workers but other classes.

Then there were the Forth ports and fishing towns with their `sailors` box` for help in hard times. Bo`ness had established such benefits as early as 1634 and in 1659 had set up a `Landsman`s Box or Maltman`s Box` which would have supported men working on the land or making malt, like those employed by Bailly Lindsay.

We cannot turn for precedent to the well-known whipmen`s societies of the border towns as they came into being in the early 19th century and were for carters rather than ploughmen.  In West Linton these are remembered in the `Whipman Plays`, a week of festivities hosted by a `whipman` and a `whipman`s lass`.

Links have been made between early combinations of workers and the friendly societies that were founded later.  Among the 12 friendly societies in Dunfermline in 1815 was a new `Maltmen and Whipmen Lads` which had just replaced an older one.  Could this older society be a continuation of our Whipman`s Society?  If so, it will be interesting to learn more about the progress and growing respectability of such a `pernicious society` in its intervening years.

Bearseed: barley seed;
Burges: a freeman of the burgh who swore an oath and paid his taxes;
Chapin: a Scots half pint, about 0.85 of a litre;
Crofts: crafts or corporations, official trade organisations with seats on the council;
Gate: road, in this case probably the High Street which ended at the old tolbooth;
Grange: near Prestonpans;
Halvermas: Hallowmass or November 1st;
Heall: whole or all;
Maltster: a manufacturer of malt from barley for the brewing industry;
Maltman: a labourer in the malt industry;
Marques: Marquis;
Melgum: also Melgand, a castle near Forfar, the Lochgelly connection came through Sir Alexander Murray`s wife, Grizel Kinninmond.
Oyr: either or other;
Rottenraw: now Queen Anne`s Street.  The reference to Rottenraw Port is unusual;
Spear: ask;
Thesaurer: treasurer;
Tolbooth: townhouse with prison cells and council rooms.
Under ye pain of: under the threat of;
Whipman: a ploughman or carter who used the whip to control his horses or oxen;
Ym, yr, yt: them, their, that.