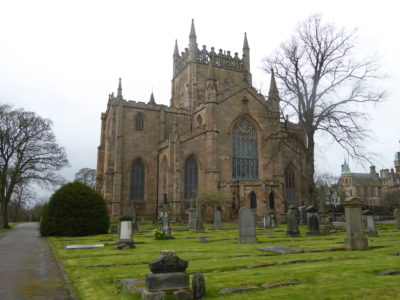 Until the later 16th century, Dunfermline’s fine abbey church (built in the 12th -13th century) consisted of a conventual section – the monks’ part – to the east and a public nave to the west. After the Reformation of 1560, the eastern part became ruinous with one part, the Psalter or Satur Graveyard, used as a burial place, mainly for the heritors, or local landowners. The old nave, however, was kept as the Parish Church of Dunfermline. By the mid-18th century the nave was in a poor state, crowded, dark, cold, damp and full of holes where ‘the pidgeons and cockaws build their nests’ and where ‘boyes or pidgeons come in and goe out’. In 1740 the crowded weavers’ loft gave way, injuring several people, and in 1753 the remains of the cross tower of the old mediaeval church tumbled down. On 19th August 1807, down went the north-west steeple, killing three horses in the stables below.

Dunfermline Abbey before reconstruction, from a drawing in 1797 by Francis Grose.

Something had to be done, but what? For ten years, from 1807 to 1817, discussions on the question took place between the Presbytery, who managed the ecclesiastical affairs of the parish, and the Town Council and heritors, who were responsible for the fabric of the Parish Church.

The discussions concerned not only the question of whether to repair the old church or to build a new one, but also, in the latter case, where to locate it. The main steps in the ten years of negotiation are as follows.

In July 1807, the heritors recommended repair of the Old Kirk, according to a design by a Dunfermline-born architect, William Stark, now based in Edinburgh. When the north-west steeple fell, the heritors feared that ‘other parts of the church may be dangerous’ and repair might not be enough. On September 3rd came the first mention of a completely new building when the heritors decided ‘to communicate with Mr. Stark on the idea of a New Church and if expedient to get a plan for a church upon the area south of the present Church’.

Building a new church at the frater hall would not cost a great deal more than repairing the Old Kirk but the minister, the Reverend Allan Maclean, had recently been granted pasture ground there and refused to give it up. The heritors sought legal advice on the matter and in June 1808, Mr. Maclean said he would give up his land at the fraters hall ‘to avoid further litigation and to accommodate the inhabitants of the Parish with a convenient church’.

It might have been thought that the matter was decided, but over the next year or two the heritors continued to debate whether to repair the church to accommodate 1800 hearers or to build a new and larger church. In 1809, Presbytery intervened. Accommodation was needed for 2800-3000 parishioners; they wanted a church of suitable size built in Dunfermline before Martinmas (September 29th) 1810 and were prepared to get legal backing for it.

So much for 1810. Fast forward to February 1816 when the heritors resolved that it was ‘under all the circumstances better to build a new Church upon a different site from the present one’. However, less than two months later, repair according to Mr. Stark’s plans was once again in favour, but with an additional Gallery, William Stark having sadly died in the interim aged only 40.

The yo-yoing continued. By May 1816, sticking to their decision of 1809, Presbytery still sought a new church, but the heritors, having agreed to ‘awaken the process’, resolved to ask Mr. Stirling of Dunblane to prepare ‘a new plan that does not materially vary from Mr. Stark’s plan’. However this could still accommodate only 1800 and would be too small for a parish of 11,000 souls.

Matters had become even more serious by the summer of 1816. The Old Kirk was completely ruinous and Presbytery ordained that it be gutted, have repairs done to walls, roof and windows and have new seating installed at a cost of upwards of £3000.

By 1817 the heritors felt that crunch time had come. At a meeting in May, Mr. James Stewart, Lord Elgin’s agent, proposed on behalf of his Lordship that a new church be built. Having previously been in favour of repairing the church, Lord Elgin now felt that the plans as they stood would make the Old Church a very inconvenient place of worship with more than a third of the congregation being unable to see the minister because of the pillars and to hear him because of the distance. He was now of the opinion that the needs of the Parish required a new church built ‘as near as possible to the present site’. Everyone would be able to see and hear well, a new church would last longer and not need repairs and, above all, there would be no interruption to services during its erection. Mr. Stewart’s proposal was accepted and a young Edinburgh architect, Mr. William Burn, was to be asked to design a church to the south of the nave.

Mr. John Sutherland who owned part of the land on which the new church was to be built was prepared to sell it, having laid down some stringent demands about access. These were accepted by the heritors on 14th May 1817 but within twelve days a new plan was afoot.

At a meeting on 26th May the heritors decided by a large majority to get estimates not only for a new church to the south according to Mr. Burn’s plan, but ‘also for the Estimate for a Church to be built to the Easterend  of the present Church, if the expense of a Church in that situation can be braught not to exceed £6000′. Mr. Burn had of course to adjust his plans to suit the new location but at a heritors’ meeting of 9th June 1817, he gave his opinion that ‘the whole is admirably suited to make a very excellent and handsome church.’ And so it proved to be.

Building of the New Abbey Church finally went ahead; the foundation stone was laid on 10th March 1818 and the first service was held on 30th September 1821. How different would things look today if the New Church had, as originally planned, been sandwiched between the two ancient buildings, the fratery and the nave? 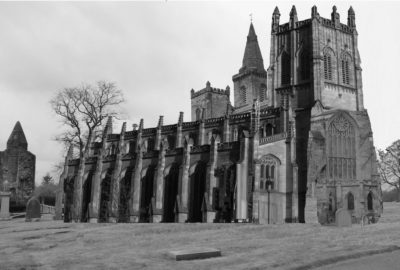 Composite image of what the Burn church may have looked like, if it had been built on the south site

As the Rev. J.M. Webster pointed out in his ‘Dunfermline Abbey’ of 1948, no-one knew for sure who was responsible for the change of site but that the ‘one thing quite clear is that to have built the new church between the nave and the fratery would, from every point of view, been little short of disaster, and that Dunfermline is under a deep debt of gratitude to the unknown benefactor who, even at the last moment, made so happy a suggestion’.