The Lost Village of Lassodie 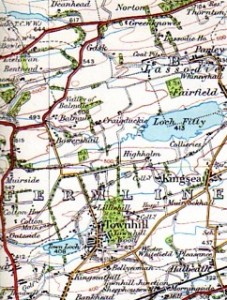 Today, any interested party asking the question “where is Lassodie?” will be confronted with quizzically raised eyebrows and much head scratching.

The reaction would be understandable since very little evidence remains of the once thriving West Fife village, which like its near neighbour Fordell, could easily lay claim to being a real Brigadoon.   However, unlike the mythical village, it does not reappear every one hundred years and is now gone forever.

Lassodie, its name is thought to have a Gaelic derivation meaning ‘garden on the brow of the hill’, lay in the Parish of Beath.   It was situated about four miles north east of Dunfermline, near the village of Kingseat and its nearby Loch Fitty. It lay on a gently rising hillside with an uninterrupted southern exposure, making it is easy to see where its Gaelic name originated.

Until the mid 19th century, the area was mainly concerned with agriculture but, during 1859, the Lassodie Coal Company, under its general manager Mr Brownlie, began coal mining at the western end of Lassodie estate.   A number of houses were built for the miners and their families near the pit head, these eventually becoming known as ‘Old Rows’.

As this coal seam became exhausted, the Company sank further pits in the area, gradually moving eastwards as it did so.   Finally, in 1893, the pits known as Numbers 10 and 11 were sunk at the east side of the estate, the former to a depth of 60 fathoms and the latter to 124 fathoms.

This continual excavation of coal was very labour intensive and a large number of miners with their families moved into the village.   As a result, a second small hamlet known as ‘New Rows’ was built just east of the original ‘Old Rows’. 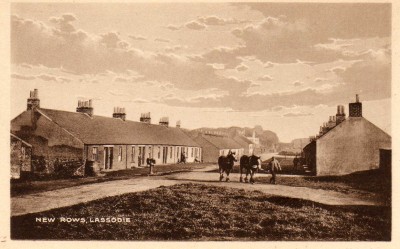 Finally, a third hamlet known as ‘Fairfield’, was built just south of ‘New Rows’, the entire village of three hamlets being connected by road and known collectively as Lassodie.

Fortunately, with the increase in the number of children then living in the area, in 1877 Beath School Board had erected a new and larger school to serve the village – at a cost of £2,000 – replacing an earlier colliery school.   This forward thinking by the School Board was to prove significant, since in later years the school found itself with a pupil roll of nearly 250 children taught by eight teachers.   A house was also built for the schoolmaster. 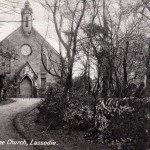 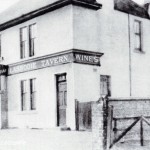 Since the village was of an isolated nature, villagers were by necessity self-sufficient and attended to their own requirements.   Apart from the school, they had a Free Church of Scotland, a number of shops including a post office, two branches of the Co-operative Society, one in Fairfield and the other in New Rows, a public house known as Lassodie Tavern, a corrugated iron village hall and, of course, many clubs and societies.

Incredibly, a working farm, Lassodie Mains, was situated at the centre of the village.   Other essential requirements were provided, especially by Annie Reid, who was a nurse in the village for many years.   To the villagers she was mid-wife, pit nurse, district nurse and on occasion – dentist!   Her wages were provided by the miners, each of whom had one penny deducted from his wages on a weekly basis.   Of course, being a mining village, accidents could be expected so Lassodie had its own Mines Rescue team and a competition winning Ambulance team. 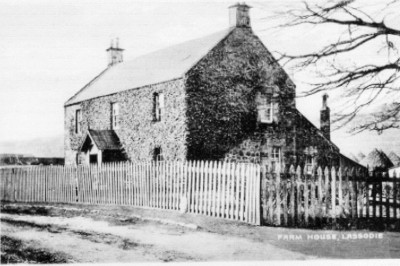 The village had a football team which played at Lochview (or Lochend) Park.   They were reputed to be very difficult to beat in their home games; some say because they were so good – the Glasgow Rangers – or Celtic – of Fife.   Others, less kindly, say it was because of the state of the pitch, which was totally devoid of grass!   One memorable game took place during 1887 when the team played Dunfermline Athletic, at Lassodie, in the semi-final of the Fife Cup.  Due to fighting taking place between the players and officials, the match had to be replayed, the Pars winning 5-1 and going on to win the trophy. The team was founded during 1884 and was defunct by 1914.

The men of the village had other sporting activities to take their minds off the hard daily grind of their working lives underground.   That favourite game of miners, quoits, was played and of course pigeon racing was also popular.   For the ‘less energetic’ an annual flower show was held in the village hall by the Horticultural Society.   Meetings were also arranged for Ambulance classes, a Burns Literary Society and, that all abiding activity of village women of the time (and today),  the W.R.I.   The village also boasted Brass and Pipe Bands, maintained by a penny a week contribution from the miners.

Obviously, the continuing successful life of the village depended on the coal pits.   No pits – no work.   At its most productive period during the early 1900’s, Lassodie village comprised around 200 dwellings, housing around 1400 people from whom, together with men from the surrounding area,  the work force for the local pits was provided.   Prior to the First World War, these miners were producing from four pits, working at high pressure, some 1300 tons of coal – daily.

So what went so drastically wrong?

The first major closure of the pits occurred at the time of the 1921 strike, when two were closed with the subsequent loss of jobs.   The gradual drift away of families had begun.   Looking for work, the menfolk found this in other areas and took their families with them.   This situation worsened during the 1926 stoppage, when unemployment occurred and the slow bleeding of men leaving the area became a haemorrhage.

By 1931, the owners of the remaining pits, Thomas Spowart & Co. Ltd., found the cost of winning the coal too prohibitive due to the expense in keeping the workings free from heavy volumes of water. They closed them down, giving the miners and their families fourteen days to vacate the company houses.   An era had come to an end and the inevitable death of the village had begun.

One village institution, the Church, did struggle on for a time, albeit in a slightly different guise.   By around 1930 the Church and adjacent manse were disused but, during 1932, the Evangelistic Church of Scotland minister – the Rev. David Patrick Thomson (1896-1974), known to all as ‘DP’ – reopened the buildings as the Retreat and Conference Centre of St. Ninian’s. 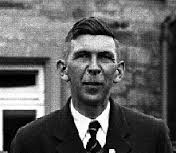 Prior to this appointment, ‘DP’ was minister at Gillespie Memorial Church, Dunfermline.   The aim was to provide a place to which those seeking something further in their Christian life could come for quiet, for fellowship, for conference, for discussion and for prayer.   One such visitor was the renowned Scottish Olympic athlete Eric Liddell, later to be immortalised in the film ‘Chariots of Fire’.   Surely by this time the whole concept of the village had changed from a busy industrial scene to one of virtual peace and tranquillity.

However, even this laudable activity did not survive in the area for long.  After being used for a short time around the beginning of the Second World War as a hostel for refugees from Nazi occupied Europe, it was eventually closed and the Church building demolished.

The village gradually disappeared but the coal industry made brief re-appearances when, during the 1960’s and later between the late 1990’s and 2013, open cast coal mining was carried out.   During this latter time, work was begun to landscape the entire area, then known as St Ninian’s Opencast Mine, Lassodie. 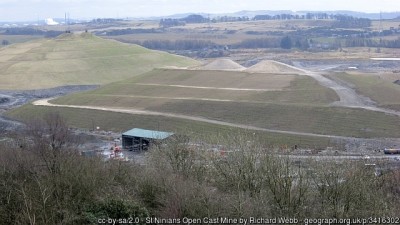 The intention was to create a sculptured park to be used for recreational purposes. However, that work has now stopped. It is hoped the area will eventually be reinstated, although nothing like that envisaged by the landscape artist Charles Jencks, who was the original inspiration behind the project.

Today there is little to be seen to indicate the presence of a village but there is at least one very poignant reminder that it existed. 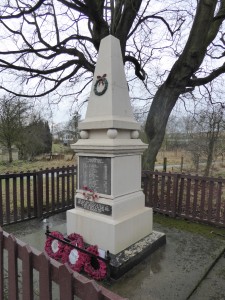 The War Memorial, commemorating those villagers killed during the First and Second World Wars, still stands in splendid isolation at the side of the B912 Kingseat to Kelty road.   It reveals the fact that twenty one men died during the 1914-18 conflict and a further four did not return from the Second World War.

Lassodie does have at least one claim to celebrity fame; a wee boy from Edinburgh who, during the 1930’s and 1940’s, visited his grandad and grannie, Neil and Helen Maclean.   Having retired to the area, they lived in a small cottage named Bentymires, on the south west side of the village, near Easter Craigduckie Farm.   At that time the laddie was known as Tommy, but in later years he became known as the man who portrayed the original James Bond on film, none other than Sir Sean Connery.   In later years he claimed that, as a laddie, he often travelled by bus from Lassodie to East End Park, Dunfermline, to support Dunfermline Athletic, and he says he still has a soft spot for the club – COYP Sir Sean.

Lassodie was a coal mining village and its demise is an indication of the fate which has befallen the mining industry since those early days.  Gone are the houses and the wee shops which served the inhabitants, gone are the various clubs and societies, the pub, the farm and, finally, gone are the people who made Lassodie what it was.

‘The Spirit of Lassodie’ by Rev. Ivor Gibson, published 2003.

‘Welcome to the Independent Republic of Kelty’ by Kelty Heritage Group, published 2000.

‘Sean Connery – The Measure of a Man’ by Christopher Bray, published 2010.

For an interesting article on two of the men commemorated on the war memorial please visit “John and Neil McLean of Lassodie“.