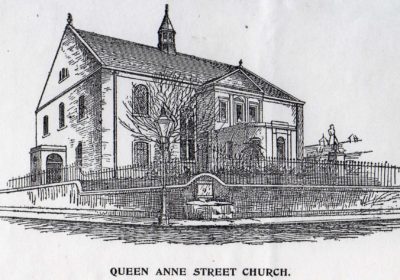 that an elegant granite fountain used to stand in Queen Anne Street?

Ebenezer Henderson, on page 682 of his “Annals of Dunfermline”, states the following –

In fact the fountain was positioned at the southwest corner of the wall, at the junction of Pilmuir Street and Queen Anne Street, but who was Doctor Dewar and why was the fountain named after an estate – later a coal mining village – situated northeast of Dunfermline between Kingseat and Kelty?

Dr Henry Andrew Dewar, a surgeon/dentist working and living in Aberdeen, was a member of the family who, for many generations, were the owners of the Lassodie estate.   He was one of the six children of Henry Dewar of Lassodie – also a Doctor – and Helen Margaret Spence, an American from Philadelphia. (1)   This explains why the fountain was named after the Dewar estate – but why was it positioned in such a prominent place in Dunfermline?

Again, the answer lies with the name Dewar. Dunfermline’s Secessionist Minister, the Rev. Ralph Erskine (1685-1752), was married on 15th July, 1714 to Margaret Dewar, daughter of James Dewar, the “Laird of Lassodie”. (2)  Our Aberdeen doctor was their great, great grandson. (3)   Queen Anne Street Church was opened in June 1741 for the Secessionist congregation of Ralph Erskine, so it is not too difficult to work out why Dr Dewar chose the site, it being the place where his ancestor had preached. (4)

Dr Henry A. Dewar did not survive long after the unveiling of his gift to the people of Dunfermline as he died in Aberdeen on 15th April, 1861, aged 48 years. He is buried, with other members of the family, in the southwest corner of the north extension to St Cuthbert’s Parish Church Burial Ground, Lothian Road, Edinburgh. (5)  The fountain outlasted him by many years, not being removed until 1924 – some say due to it being unhygienic but, according to the Dunfermline Press of 31st May, 1924, the removal was due to the widening of Pilmuir Street.

One question remains – where did the water supply which served the fountain originate?  The probable answer can be found in the publication “Historic Dunfermline Archaeology and Development” by E Patricia Dennison and Simon Stronach.   On page 50 the authors tell us that, during the year 1764, the town council started to lay water pipes from the Head Well – also known as St Margaret’s Well – situated about two miles north of the town.  The scheme was eventually completed by 1778 with the water supply terminating in a cistern at Reservoir Close – now known as Douglas Street – the north end of which is adjacent to the site of the fountain.   Assuming the system was still in working order in 1860, it would appear the water for the fountain was supplied from there, originally.

However, Henderson states on page 742 of the “Annals of Dunfermline”, “On 6th September, 1878, the city was, for the first time, supplied with water direct from Glensherup” – and it is likely water for the fountain was subsequently supplied from this source.   This appears to be confirmed by Daniel Thomson who states the fountain was “made to flow with the finest Glensherup, for the benefit of the thirsty lieges”.(6)  The Glensherup Reservoir, situated in Glen Devon, Perth and Kinross-shire, is still in use today, augmenting the water supply for Dunfermline and surrounding area.