THE DUNFERMLINE SEDUCER AND THE ERRANT WIFE

One of the strange stories in the 18th century Kirk Session Minutes of Dunfermline is that of a Dunfermline widower and a married woman from Crieff. It demonstrates how different Kirk Sessions worked together. When a person came to live in a town or parish they had to provide the Kirk Session with a certificate of good behaviour from their former domain and when they left they required another one. On January 7th 1793 John Strachan, late of Roscobie north of Dunfermline, appeared before the Kirk Session of Dunfermline seeking a certificate to cover his removal to the Parish of Muckhart but ‘Session refused to give him one until they were informed of the Truth of Reports gone through the County infavourable to his character’.

The rumours apparently concerned Strachan and a woman in Crieff and the Reverend Fernie, moderator of the Dunfermline Kirk Session, wrote to the Minister of Crieff for further details. The Crieff Minister replied enclosing two extracts of the Minutes of his Kirk Session, concerning Margaret Reid, a married woman ‘to whom John Strachan had behaved so unsuitably as to give great offence to this Parish’.

The Minutes show that on May 27th 1792 Margaret Reid, spouse to David Thomson, appeared before the Kirk Session of Crieff and acknowledged that on Friday the 22nd of July last, she went for a weekend visit to visit friends in the neighbourhood of Dunfermline (30 miles away) and on the road near the town she met with John Strachan, a widower of Roscobie, about five miles north. He was very civil and obliging to her and accompanied her to her friends’ house below Dunfermline and invited her to his house considerably above the town, and a great distance from the Dunfermline to Crieff road. Margaret lodged at his house on Monday night and on the next day he conveyed her on his own horse back towards Crieff. At Burnfoot, about ten miles from Crieff, he was to return home but he took a private road through the hills and met her again at the Bridge of Glendevon. They wandered off the way but finally arrived at Muthill at 9pm, where Strachan put up his horse at Alexander Baine’s. After resting there they walked the five miles to Crieff and at 6 a.m. Margaret returned alone to her own family. 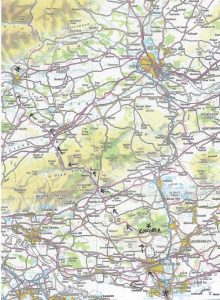 Margaret and John’s route between Dunfermline and Crieff

Strachan visited Margaret in Crieff the next Monday and lodged in her house that night, in the absence of her husband, who had his usual residence at Cromwell-park, Perth. The next day she accompanied Strachan from Crieff to Muthill, where they stayed in Alexander Ritchie’s from 5 to 8 p.m. after which she returned home without him.

She had a letter from him on the night of the 10th September telling her that he meant to see her on the day following Perth Market and he accordingly came up with her and her husband on their road back from Perth. Strachan could not stay in Crieff, however, ‘on account of the Mob that rose against him’. On the following Thursday ‘he came to visit her in Woman’s Cloathes’ but, being known by some of the people, was apprehended and imprisoned that night in Crieff and next day conveyed to Perth Jail. Margaret confessed to Session that ‘appearances were so much against her in this affair that the World has too much reason to suspect her of Adultery’ and as she had been excluded from Church privileges and wished to be restored to the Benefit of them, she is willing to submit herself for that end, to such Censure as the Church may inflict. The Session referred the case to the Presbytery at Auchterader on the first Thursday of July.

The second minute is dated July 29th 1792 and records that Margaret duly appeared before the Presbytery who had rebuked her and returned her to the Session with their advice. She was sentenced to appear before the Sabbath congregation in the Church for public rebuke in the forenoon and afternoon. She made her appearance as sentenced and was further rebuked by the Session, but, considering her former Character and the fact that she and her family had moved 30 miles away, Session dispensed with further censure, absolved her from the Scandal and allowed her a certificate to that effect.

In his letter to the Rev. Fernie, Rev. Stirling had stated that he had treated the woman with all Lenity because she was ‘removing with her Husband and Family to a Great Distance, and had been formerly of a Decent Character’, but what of John? Mr. Stirling informed the Dunfermline Session that Strachan might have been required to pay penance before the congregation for his scandalous behaviour, but not only had the indecency of his letter to Margaret led the Justices of the Peace to commit him to Perth Prison, but the treatment meted out by the crowd in Crieff on his public appearance in the streets among them was ‘nearly as infamous as if he had stood in the pillory’. The Crieff Session obviously felt that Strachan had got his just desserts but whether or not the Dunfermline Session gave him his certificate is not recorded. 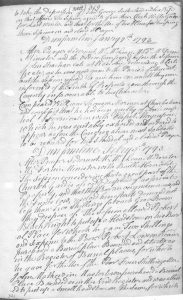