Much interest was aroused among antiquarians, patriots, politicians and others when Dunfermline`s medieval cokete seal – or rather the matrices that created it – came up for sale in 2014, especially when the purchaser turned out to a foreigner who wished to take his purchase home with him.

A cokete (or cocket) seal was used on documents by customs officials in medieval times.  The seal was created by a beeswax mixture being placed between two carved matrices of different designs, so that its two faces had different patterns.  The seal was then affixed to the document by a strip of parchment. The matrices were of legal standing, kept securely and normally destroyed when obsolete or damaged. 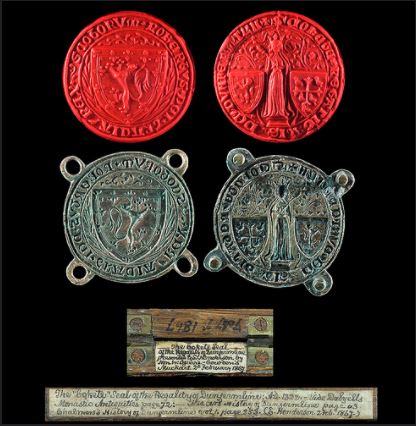 Dunfermline`s seal is of particular interest as it was commissioned by Robert the Bruce in 1322.  Made of a copper alloy, each matrix is 55mm (about 2 ¼ inches) in diameter and weighs 337g.  They are in a good condition apart from slight cracking at the edges resulting from pressure from the seal press in forcing the wax fully into the design.  It is possible that they were discarded (but somehow not destroyed) when the damage became evident.

The obverse (facing) matrix depicts St. Margaret robed and crowned, holding a sceptre in her right hand and a book in her left,  She is standing between two shields, one bearing the arms of Dunfermline Abbey (a cross among five martlets – Margaret`s birds), the other the royal arms of Scotland (a lion rampant), with the legend, in Lombardic Latin, S`COKETE REGALITATIS DE DVNFERMELYNN (Cokete Seal of the Regality of Dunfermline).  The reverse matrix or counterseal bears a shield within foliage depicting the royal arms of Scotland and bearing the legend ROBERTVS DEI GRACIA REX SCOTORUM (Robert by the Grace of God, King of the Scots).

Details of the commissioning by Robert the Bruce are too long to be included here but can be found on-line under `Dunfermline`s Cokete seal` or in most historical accounts of Dunfermline, for example E. Henderson, Annals of Dunfermline, 1879, pp. 120-121.  In a writ to the Magistrates of Bruges, Bruce emphasised that he had granted the seal to the Abbey and when it was presented `your whole community should be requested to receive it as our own proper seal`.

In December 2014 when the Dunfermline Cokete Seal Matrix Pair came into the hands of Timeline Auctions in London, something of its provenance and chequered history was revealed. The pair came in an antique, custom made, wooden box with a label depicting the counterseal and the following hand-written labels inside: `The Cokete Seal of the Regality of Dunfermline presented to S. Henderson (see note below) by Hon. W. Ogilvie – Cowden`s Muckart 2nd February 1867` and `The Cokete Seal of the Regality of Dunfermline A.D. 1323` with the following references: Dalyell`s Monastic Antiquities and both Mercer`s and Chalmers` histories of Dunfermline (E. Henderson, 2 Feby. 1867) and a bound set of research notes.

(Note: Ebenezer Henderson`s father has been given as `S. Henderson` but he was in fact John Henderson, an ingenious Dunfermline watch and clockmaker and mechanic.  The date Feb. 2nd 1867 was probably when Henderson got the package and notes together and Cowden`s Muckart was his address while he was writing his Annals.)

The known provenance of the matrices included their being in the possession of Sir William Ogilvie, Baronet of Nova Scotia, of Carnousie, Banff, who died in New Zealand in 1861, having presented the matrices to John Henderson, Ebenezer`s father, who died in 1854, and apparently left them to his son.  Ebenezer Henderson notes in 1878 that they had been in his possession for a great many years (Annals, pp. 120 & 766).  There was also a record of their being exhibited at the Society of Advocates in 1809 and later in the 19th century.  Ebenezer died childless and intestate in 1879 and his wife Betsy Coldsteam Brodie inherited most of his estate.  On her death in 1888 everything she possessed `real and personal of whatever kind or denomination` was bequeathed to John Robertson joiner in Dollar, who died wealthy but intestate in 1897.  In 2014 when they came up for auction they were in the possession of `a London gentleman` but their arrival there is a mystery at present.

The matrix pair was valued for auction purposes at £80,000 to £120, 000 but sold for £151, 000.  The name of the buyer was protected, as was his country of residence, but the USA has been hinted at. The idea of this important Scottish artefact being taken abroad was greeted with dismay and when the buyer applied for an export license from the Arts Council its  Reviewing Committee on the Export of Works of Art and Objects of Cultural Interest (RCEWA) became involved.

At a meeting of the RCEWA on November 18, 2015, the question of whether or not a licence should be granted rested on the three Waverley criteria, i) is it so closely connected with our history and national life that its departure would be a misfortune?, ii) is it of exceptional aesthetic importance?, iii) is it of outstanding significance to the study of some particular branch of art, learning or history?  Following the arguments put by an expert witness, the committee decided that the matrices fulfilled criteria i) and iii) as there were few objects that had survived from the reign of Robert the Bruce, a decisive period in the history of the kingdom; they were testament to the close connection between the kings of Scotland and Dunfermline Abbey the resting place of Scottish royalty, including Bruce himself, and they would be invaluable in the study of medieval history and particularly of medieval seals.

During the discussion it was noted that having both parts of a seal matrix was very rare and that the excellent quality and sharpness suggested the workmanship of Paris or the Netherlands. It was felt that time should be allowed for further research into the provenance between the 14th century and the early 19th century when the matrix pair resurfaced.  It would be interesting to know how the matrices came into the hands of the Ogilvy family, why Sir William presented them to John Henderson and how did they get from Ebenezer Henderson to the `London gentleman` who put them up for auction.

The committee voted to recommend to Ed Vaizey the Minister of Culture, Media and Sport, that the decision on the export licence be deferred for an initial period of three months and, if within that period, the Arts Council received notice of a serious intention to raise funds to purchase the pair, a further deferral of three months. The purchaser (who seemed reasonable) agreed to these terms and also to allow the artefact to be exposed for sale if a British buyer seemed likely.  As recommended, the export licence was deferred until May 2016 and then until September 2016.

The case is still under consideration but rumours abound of a potential purchaser who would like to present the matrix pair to a Scottish museum and surely the best place for this important artefact, so closely associated with Dunfermline, would be in our own new Library and Galleries.

An Update on the current status, from the Dunfermline Press.

There was always some doubt about the provenance of the Cocket (or Cokete) Seal and the Reviewing Committee on the Export of Works of Art and Objects of Cultural Interest (RECWA) recently reported to the Arts Council, which deals with such export matters, that they agreed with experts from the British Museum that it `was not possible to confirm or discount the possibility that the seal under consideration was a medieval object commissioned by Robert the Bruce in 1322`, the main reasons being a lack of a corpus of comparable objects and the inconclusive nature of scientific analysis.  It could be a later replica of a lost original and because more study is needed and it would be a pity if it was exported, John Glen, the Minister for the Arts, has placed a temporary ban on the seal until November 24th this year which may be extended to February 2018 if it appears that the purchase price of £151,250 can be raised to keep it in Scotland`.