The Black, Blue and Red Rows

that Dunfermline once had a Black Row, a Blue Row and a Red Row?

The word ‘row’ is not uncommon in Dunfermline – think of the New Row, Collier Row (later Bruce Street) and Rotten Row (later Queen Anne Street).  But there were others.  In ‘Anent Dunfermline’ Daniel Thomson describes ‘The Tabernacle’, which was built in 1780 as a place of worship for the newly-formed Scotch Independents.  This two-story building was situated in Woodhead Street when it was known as the ‘Fitpaith’, opposite what would later become Dewar Street.  Thomson describes the women and men climbing the narrow stone stair to their bare and simple room, in ‘petticoats and scuttle bonnets, in knee breeches, broad bonnets and bucked shoes’ and adds that they mainly came from the nearby ‘Back of the Dam, from Golfdrum Street, from the Blue, the Black, and the Red Raws’.  They were strict and serious folk, but caring of one another, especially in the case of illness or other hardship.1

Where were these Blue, Black and Red Raws (or Rows) and how were the inhabitants occupied?

The censuses of 1841 and 1851 are helpful here.  The rows were situated near the Abbey Mill Dam, a sizeable reservoir which was supplied with water from the Town Loch and which in turn fed the town mills. 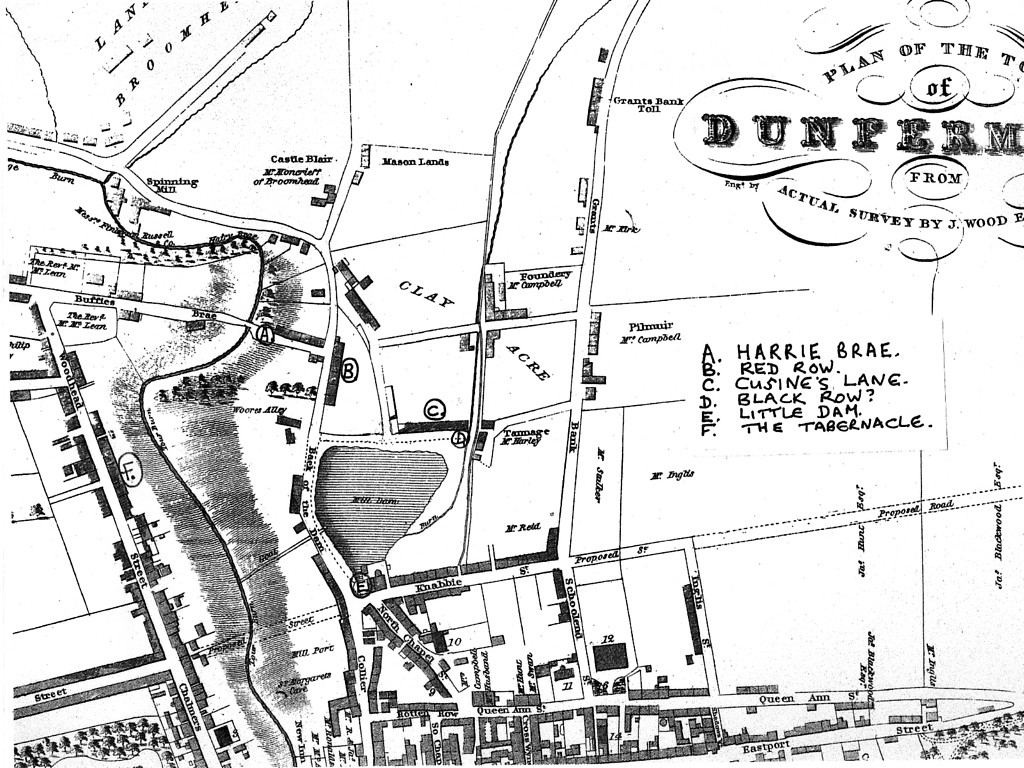 Living so near the dam which became more polluted year by year meant that the people in these rows were susceptible to disease.  Between January 1847 and August 1849, for example, a local newspaper reported that ‘sixty per cent of the entire population of Black Row and the upper part of Bruce Street were afflicted with typhus fever (probably meaning typhoid).

Black Row lay west of Pilmuir Street and north of Knabbie Street (now Carnegie Drive) and continued to Cusine’s Lane, the site in later days of Canmore Works (for power-loom weaving), Winterthur Silk Mill and Thomson’s World of Furniture.   Red Row was round the corner from Harriebrae, at the east end of Buffie’s Brae and went on to Wooers Alley and Damside Street.  Blue Row remains a mystery at present as does the reason behind the names.  All suggestions welcome! 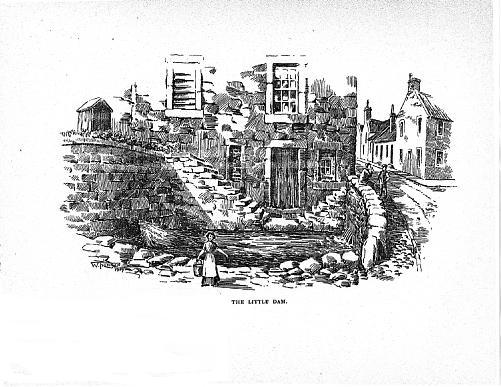 The Little Dam, by William Thomson2

The people in these rather poor rows were mostly associated with hand loom weaving. In 1841 Black Row consisted of ten houses whose occupiers were listed as a washing woman, a woman of 80, five linen weavers and three yarn winders and their families, totalling 39 people in all.  Red Row consisted of eight houses and totalled 43 inhabitants including four linen weavers, one cotton weaver, a machine worker and a woman of 50.  In one house lived David Russell, aged 70 years, James Russell, 35, James Russell, 15, all linen weavers, and John Horn, 12, an apprentice linen weaver, and in another lived John Paton, 45, linen weaver, his wife Isabella, 40, Margaret and Isabella (probably twins), 15, linen weavers, Henry and Graham (definitely twins, but Graham was a girl), 14, Joseph, 11, George, 9, Giles, 6, and James, 2.

The Mill Dam was probably drained and partly filled in about 1867 when the Canmore Works were erected on the site and in 1886 the same applied to the Little Dam below it and the new Caledonia Works, but  the ‘coloured raws’ lived on into the 20th century.

And what became of the old Tabernacle with its strict, earnest and kindly congregation?  Sadly, in 1802, there was a split about doctrine and part of the little congregation broke away, firstly to launch a new Independent Congregation and then to become part of the Scottish Baptist Church.  The Tabernacle folk carried on as best they could until they dwindled to a mere handful and, when the Scotch Independent Sect itself came to an end in 1807, the people of the nearby raws would have had to find somewhere else to go for spiritual solace on the Sabbath.

2. The Dunfermline Hammermen by Daniel Thomson, p197, drawn by his son William Thomson