Near the east gate of the Abbey Churchyard stands a small building that is sometimes said to be a morthouse for keeping bodies safe before burial. The plot where it stands has also been pointed out as the site of the graveyard’s pauper burial place, but both of these allegations are very far from the truth. The ‘morthouse’ was actually built as a very upmarket toolshed and the place where it stands was never used for burials of any kind because it was too waterlogged. 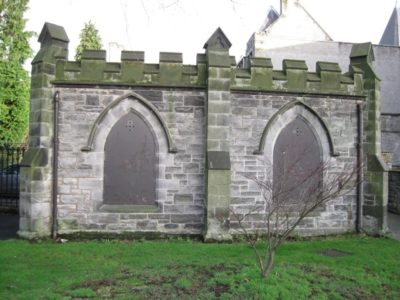 The story of the toolhouse begins in 1895, when an Archaeological and Museum Society was founded in Dunfermline with Andrew Carnegie as its patron. The Society held a series of lectures on suitable subjects but its main aim was to establish a museum in the town and it decided that the rooms in the Old Tower over the Pends would be the best place for this. One of these rooms had been used for many years by the churchyard Superintendant, gardener and gravediggers to store their tools, so the Society agreed to build a new tool store for them.

At the Heritors[1] meeting of 29 August 1896 the Rev Mr Stevenson, the Honorary Secretary of the Archaeological Society, submitted plans drawn up by the prolific local architect John Houston for an alternative accommodation for the Superintendant and the gravedigger, in lieu of the rooms in the Abbey Pends that were to be used for the new museum. The Heritors examined the plans and made some suggestions to make the building accord better with the architecture of the Abbey (unfortunately the minutes of the meeting do not state what these alterations were) and it was arranged that Sir Arthur Halkett of Pitfirrane would consult the architect on the subject, the amended plan to be submitted to a meeting of the Heritors’ managing committee. On 9 September 1896 John Houston submitted the amended plans to the committee who approved them.

The chosen location for the tool store was in an area just inside the eastern gate of the graveyard, which the Heritors had agreed, at a meeting held on 9 May 1873, would never be used for burials. The minutes of that meeting say that:

Mr Landale stated that he had some applications for grave rooms recently, in the unoccupied piece of ground on the north side of the east entrance walk, next to the Commercial Bank and other proprietors, but that although that ground was laid down and numbered in the plan of the burying ground, he did not feel warranted in giving of any rooms there because it had been ascertained some years ago to be in a very wet state.’

Sir Peter Halket of Pitfirrane proposed, seconded by James Alexander Hunt of Pittencrieff and agreed by the meeting, that the plot should remain unused.

This is the area that has been pointed out as the place where paupers were buried, but the graveyard records show clearly that the ‘free burials’ were made in the two large plots in the graveyard where there are now no gravestones; the burial register names them as the West Plot and the Centre Plot. The West Plot now bears a plaque stating that this is where the victims of the cholera outbreak of 1832 were buried, which is true but only tells half the story. Similarly, the plaque on the Centre Plot, stating that it was the site of the monks’ burial place, is correct as far as it goes, but leaves out the facts about its use in the nineteenth century. 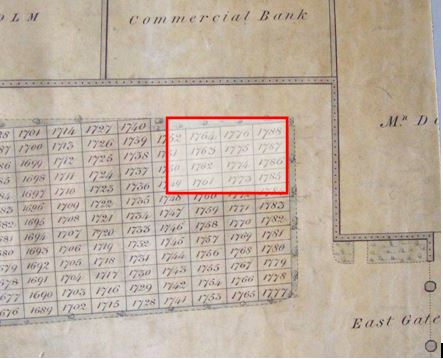 The new Museum was opened on 6 August 1897 and the report in the Dunfermline Press of the following day contains a short account of how the toolhouse came to be built:

The Tower at the Pends, which has been converted into a Museum for the preservation of articles of interest connected with Dunfermline Abbey and Palace, was formally opened as such yesterday afternoon. The opening ceremony was carried out by Mr Carnegie of New York, at whose expense the work of renovating the Tower was carried out. The old building was formerly used as a tool-house by the Superintendant of the Abbey Churchyard and before the alterations were sanctioned an undertaking had to be given that a new tool-house would be provided. The plans for the new erection, occupying a site behind St Margaret’s Hall, were prepared by Mr John Houston, architect, Dunfermline. The cost of the tool-house was also defrayed by Mr Carnegie.

Another erroneous idea promulgated about the toolhouse is that it was built by the Carnegie Trust, but as the Trust was not established until 1903 this could not be the case, even if there were not the contemporary records to reveal the facts. Taken altogether these stories demonstrate how easily false ‘facts’ and half-truths can be spread and how important it is to consult original sources if that is at all possible.

The Toolhouse In Later Years

The toolhouse may or may not have been built with a flushing WC, but it certainly had one by the year 1909, when the Heritors paid the water rates for it. In 1912 they rather belatedly installed a small gas heater ‘for the comfort of the superintendant in winter and also for the better preservation of the tools in damp weather’. In 1925 the Abbey graveyard passed into the care of the Parish Council, which continued the use of the toolhouse by the graveyard staff and in the following year an eight-foot-high partition was erected to separate off the WC. The building is now used by visiting staff of Historic Environment Scotland and it would be helpful if HES would install an information board explaining its history, especially as it will be visible from the viewing area of the new Museum building.

[1] Local landowners who paid towards the upkeep of the church building and graveyard and administered them jointly with the Kirk Session.