In the late 1890’s, the linen industry in the Dunfermline was passing through a period of serious depression. Most of the factories were working short time, and, in some cases there were dismissals of female workers on a fairly large scale.  Local businessmen exercised their minds on the subject of creating alternative employment, especially for the female section of the community. Prominent among these was Mr Ralph W. Stewart, whose yarn and cloth bleaching works was suffering from the general industrial decline. Mr Stewart’s younger son was a rubber planter in Malaya, and so a factory for the production of rubber materials was built at a Dunfermline Bleach Works.

Ralph Stewart, had inherited the Elgin Beach Works from his uncle, Mr Thomas Walker, of Thomas Walker & Co. That company was founded in 1860 at Elgin Bleach-field to purchase linen yarn, to bleach it and to sell it on. This the company did until the 1880s, when they also undertook the bleaching of woven linen and the finishing of it, mainly for local firms, but also from Ireland. On the death of Thomas Walker, in 1895, the company was left to Mr Ralph W. Stewart, who changed the name of the bleaching company to his own.

With a keen appreciation of the necessity for safeguarding the industrial prosperity of his native town, Mr Stewart caused to be erected, alongside his bleach-works, a new factory, then known as the Scottish Central Rubber Works, in which from the outset was conducted a flourishing industry.  It was in May, 1900, that production in the new works began.  The labour problem, of course, had to be solved before the plant could be operated, since rubber manufacturing processes were unknown in Dunfermline. In Edinburgh, the Scottish centre of the industry, Mr Stewart recruited his first staff of skilled workers. In all, fifty employees, mostly women, came from Edinburgh to Dunfermline to inaugurate the new industry. Their job, in addition to producing, was to train the local girls.  Among the first male employees were several key men, skilled in all the branches of rubber manufacture. 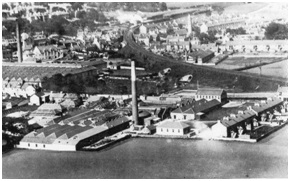 Elgin Rubberworks c.1920 to the immediate left of the factory chimney in the foreground

One of those who came over from Edinburgh as a young man, to start in the rubber-works, was Sandy Howie. He made quick progress and, for many years, was the factory manager. Other names making the move from Edinburgh included John Alexander, James Gilchrist and John Archibald.  Mr Archibald, whose home was in James Street, remained with the firm until he retired in 1949. The products from the factory in the early days included rubber sheeting, hoses, shoes and waterproof coat material, the latter being made up into coats by the company for the export market – mainly to China, until this market closed in 1914.  Some 130 people were initially employed at the works.

One of the younger members of staff at that time was Margaret Ross who started with the firm on leaving school, aged 14 years, in 1908.  Margaret stayed at Tavern Cottages, Hill of Beath and when interviewed, aged 95 years in 1990, she recalled getting the tramcar into East Port, Dunfermline, and then walking down to Elgin Street for a 6 a.m. start. Initially she made black sand-shoes which sold for 10d (4p) for children and 1/11d (9p) for adults.  After a short time she progressed to making white sand-shoes.  Her pay was 8/- (40p) per week. She recalled that in later years one of the Stewart family died, and because he had not married, he left money in his will to all the employees – ten pounds if you had worked less than 10 years and twenty-five pounds if you had worked more than ten years.  Maggie said she got her twenty-five pounds and cried with the emotion of having so much money at once.  Maggie worked with Stewarts for 41 years, finishing up as forewoman of a team of women workers, before emigrating to New Zealand in 1949.

In July, 1910, the rubber-works suffered a serious fire resulting in one of the drying sheds being destroyed.  In the shed was a considerable stock of rubber most of which was rendered useless by the blaze.  Fortunately, the shed was in a relatively isolated part of the works which prevented more extensive damage. The advent of Rosyth Dockyard, bringing as it did a large addition to the local population from the south of England, did much to change the characteristics of Dunfermline, but the process of change was really begun some years earlier, with the influx of Edinburgh people who came to assist in setting up the new industry of Rubber manufacture. 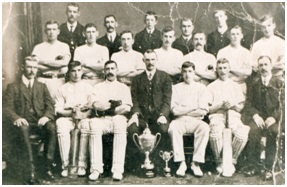 Elgin Rubberwork’s Cricket Team c.1925 with factory manager, Sandy Howie 3rd from left in the front row with members of the Stewart family in suits in front row

During the First World War, the main production was waterproof groundsheets and coats, the latter continuing after the war, and the production of shoes.  Shoe production steadily increased until it reached a peak of 13,000 pairs a day. When the linen trade started to suffer another decline in the 1920s the Elgin Bleachfield suffered also, and eventually the Rubber Works, which became a limited company in 1923, under the name of Ralph W. Stewart & Co. Ltd., expanded into the bleach-work premises.

All through its existence, the firm of R. W. Stewart & Co. Ltd. showed great enterprise, and rubber goods manufactured in Dunfermline became known, and were in high demand, both at home and abroad.  There were times during the existence of the firm when as many as six hundred persons were employed at the works.  The articles produced varied over the years depending on the demand, but large quantities of shoes were exported to the countries of the far-east. For many years, the Dunfermline-made raincoats were in constant demand in the home markets as well as in markets overseas.  Never averse to adapting their plant to satisfy changes which took place in the uses for rubber, Messrs Stewart found a ready market for hot water bottles, inner tubes for cycle tyres, toy balloons, and various other articles.  During the South African War they executed a large contract for the supply of waterproof capes which were issued to the men of the mounted regiments on active service in South Africa. These garments became known in the works as the Baden-Powell capes. 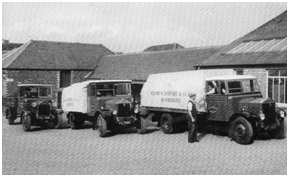 In the 1930s, however, production consisted almost entirely of shoes.  Those met with fierce competition from Japan until 1936 when trade tariffs prevented the importation to the U.K., of shoes from Japan.  But Hong Kong competition increased at nearly the same rate as the Japanese diminished. This state of affairs continued until the Second World War. Throughout the war the company washed West African rubber for the Government.  This was dispatched to consumers throughout the country. Production of footwear did not restart until 1945, when the demand for sports and gym shoes was very great.  Over-boots also were in great demand.

In 1953, Messrs Stewart entered the Canadian market with winter boots with fur-lined tops and over-boots.  This appeared to be a lucrative market but in fact contributed to the firm’s downfall some four years later.  It was very much a seasonal trade, reliant on contracts being renewed each year.  In addition, the demand for rubber over-boots was badly affected by the introduction of plastic overshoes to the Canadian market. Notwithstanding these problems, a new laboratory which contained the most modern experimental and testing equipment for the manufacture of rubber foot-wear, was introduced at Elgin Street in 1955.

In late November, 1957, rumours of trading difficulties at the rubber-works circulated in the town resulting in the subject being raised in the House of Commons by the M.P. for West Fife, Mr W. W. Hamilton.   This brought a response from the then Chairman of Messrs Stewart, Henry Ralph Scott Stewart, to the effect that such rumours were unfounded and that there was no question of the factory closing down. Only three weeks later, however, on Friday, 20th December, 1957, all 200 employees at the works received in their pay packets a letter advising them that the factory would be closing the following Friday. The letter stated:-

“It is with profound regret that the Company must give you one week’s notice as from today.  This means that you will cease employment with the Company on 27th December, when you will be paid one week’s wages.  The lie time and holiday pay, amounting to two weeks wages will be paid at 5.30 pm to 6.30 pm on Friday, 3rd January, as it will not be possible to calculate the amount before then.

The Directors would like to thank you for your very loyal support in the past, and particularly during the recent difficult times.  They appreciate that the Company’s reputation for good quality has been built on the high standard of workmanship which has been shown by you and your colleagues.

The Directors would like to emphasise that they have made a strenuous effort to keep the firm going in the face of strong competition and have tried to interest others to obtain outside support to bring about a merger, so as to find a solution which would ensure our continuance.  Unfortunately, this has not been successful.

The Company has exhausted all its available resources in continuing trading up to the present time, but it is no longer possible to trade on.  It would appear inevitable that liquidation will follow in a very short time. Naturally, everything possible will be done to assist in finding you other employment.”

At a meeting of the Company’s creditors on 9th January, 1958, it was disclosed that a last-minute offer to take over the Company had been made by Mr Harry Akers, on behalf of Modo Ltd. of London, who had premises at Inverkeithing and Newmills.  This offer was turned down by Messrs Stewart and their creditors. It was disclosed at the meeting that the slump in the fortunes of the Company occurred in 1955-56 when they ran into difficulties with their Canadian market orders, resulting in claims against the Company in both years.  Canadian orders were cancelled in April 1956, and efforts to make up orders on the home market that year failed.  In 1957, the Company made a desperate effort to keep going and developed a new line in industrial Wellington boots.  The Stewart family had pumped money into the firm but it was not possible to turn things around.  At the time of closure the Company’s buildings occupied 112,000 square feet and they also owned nine houses adjoining the works in Elgin Street.

Thus ended an enterprise which had started in times of economic difficulties in Dunfermline, and which had been a bold move at the time by its founder, Ralph Walker Stewart.  The rubber-works had traded successfully at Elgin Street for over 55 years, providing employment for many people in the town over that period, but sadly, was forced to close at a time when unemployment in the area was again on the increase.