Queen Margaret – How important was she to Scotland? 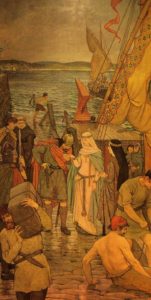 It is generally accepted Margaret, Queen, later Saint, of Scotland, was born in Hungary around 1046.   Her father, Edward the Exile, became heir to the English throne of Edward the Confessor, who was half brother to her grandfather Edmund Ironside.   It is also generally accepted she travelled to England with her parents, sister and brother around 1056 in order that her father would be on hand to assume the mantle of kingship on the death of the Confessor.   However, fate conspired against the family with the death of her father, which preceded that of the Confessor, to be followed, in 1066 by disaster for England at the Battle of Hastings.   As a result, around 1067, Margaret’s mother – Agatha – decided to leave England with her three children, possibly with the intention of returning to Hungary.   However, it is suggested by the author, she may have intended travelling to Scotland in an effort to enlist the help of the Scottish king – Malcolm III – whom she hoped would assist her son – Edgar – recover the English throne from William the Conqueror.   Whatever the reason, legend has it their ship entered the Firth of Forth and was driven ashore during stormy weather at the bay now known as St Margaret’s Hope, between North Queensferry and Rosyth.

Margaret, who had been religiously influenced whilst staying at the court of the Confessor, was a very pious young woman and was inclined to spend her life as a nun.   However, she was eventually encouraged to marry the king of Scots – the recently widowed Malcolm III.   The marriage took place in Dunfermline on Easter Monday, 1070.

According to her biographer, Turgot, within two years of her marriage, Margaret had built a priory in Dunfermline “in the place where her wedding had been celebrated”.   The priory was dedicated to the Holy Trinity and to carry out the religious duties, she had monks sent to Scotland from Canterbury.  Prior to her arrival in Scotland the religious life in the country was led by Culdee monks, who, for around 500 years had followed the teachings of St Columba.   It has been suggested the Culdee form of religion had become stagnant and duties were performed mechanically and Margaret, who had been taught the Roman form of religion, set about attempting changes.   She appears to have been sympathetic towards the Culdee monks but insisted on change, an example being the length of the fasting period at Lent.   The Culdees fasted for 36 days but she changed it to 40 days.   Apparently the Culdees excluded Sunday!   Eventually, with the help of her husband, the ancient form of religion began to be changed although it has to be stressed the Culdees continued to perform their religion for some considerable time. 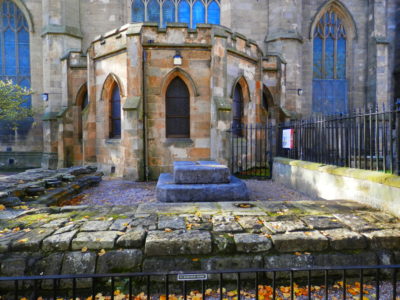 Another example of Margaret’s influence can be found in her charitable work.    She is known to have tended the poor by feeding them and giving them money, sometimes taking it from the king’s purse, and she often paid a ransom to free English slaves and allow them to return to their own country.   She is credited with not only improving the behaviour and manners of the Royal courtiers, but also those of her husband!   No small undertaking!   She was instrumental in the construction of piers at North and South Queensferry and had refuges built in those places to provide a place of rest for pilgrims on the way to St Andrews.   In addition, although of a very religious mind, she was aware of more worldly matters and Turgot says she encouraged merchants to trade and bring goods, previously unknown, into the country.

It is not clear when Malcolm and Margaret left Dunfermline to move to the more secure castle of Edinburgh but there seems little doubt this happened.  What is known is that in November 1093, Margaret, her husband Malcolm, and their eldest son, and heir to the Scottish throne – Edward – died within four days of each other.   Malcolm was killed at Alnwick.   Edward received fatal wounds at the same place, dying a few days later and Margaret, lying ill in Edinburgh Castle, died on hearing the news of her husband’s death.   This resulted in a struggle for power taking place in Scotland – but that is another story. 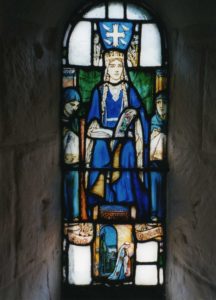 However, the story of Margaret does not end with her death, because in 1249, Pope Innocenti IV, had her canonised.   Why?   Some suggest it was due to her undoubted charitable works.   Others say it was due to the miracles, which are reputed to have occurred as a result of her presence – the miracle of her Holy Book which, having fallen in water and on being recovered, was found to be almost undamaged is only one example.   These reasons are very commendable – if one believes in miracles – but one historian gives a more prosaic explanation when he states it was “one of a series of papal favours granted to Scotland at that time in return for the nation’s support of the Crusades in the Holy Lands”.   Perhaps it would be suffice to say that the canonisation occurred as a combination of the foregoing.

Perhaps Margaret’s greatest contribution to the history of Scotland can be seen in the Canmore dynasty which she and her husband founded.  The couple had eight children, four of the boys – Edmund – Edgar – Alexander – David – becoming in turn, kings of Scotland.   In addition, one of her two daughters – Matilda – became Queen to Henry 1 of England.    Of course, the dynasty did not end with Margaret’s children but continued for around two hundred years, ending with the death of the Maid of Norway in 1290.

Was Margaret important to Scotland and did she have an influence on Scottish history?   On both counts I would argue yes.   From the religious aspect perhaps her influence was less than has been suggested.   She did cause changes to be made but did not cause a complete change from the ancient form of religious practice, this taking place after her death.   There seems little doubt she was responsible for changes such as eradicating the use of the Gaelic in church services.   She also insisted not only should Sunday be a day of rest but also it should be spent in prayer.  In addition, having spent a number of years in England, she was aware of that country’s religious organisation, a knowledge it is claimed she made use of.   This latter point could, of course, cause her to be accused of having an Anglicizing influence on Scotland to the detriment of the native Celtic culture.    She brought a ‘woman’s touch’ to a very warlike king and kingdom and by her example, influence and more particularly, her piety, she improved behaviour and manners and exerted influence on her husband in many ways, not least in encouraging foreign trade.   However, it might be argued that her greatest legacy to Scottish history was the dynasty she and her husband began on that day in 1070 when they married in Dunfermline.