You`ll all know Moodie Street where Andrew Carnegie was born and where his Birthplace Museum now stands.  Called the New Road after it was opened in 1781, it was renamed Moodie Street in 1809 after James Moodie, who was Provost of Dunfermline from 1792 to 1807.  As head of the Council and chief magistrate, the Provost was an important personage.  In `When we were boys` published in 1911, but looking back to earlier times,  R. S. Mackie recalls an old saying `Ance a Bailie, aye a Bailie; ance a Provost, aye my lord` and adds that `We heard of Provost Moodie, and of Provost Kinnis, and Provost Birrell and others long after the date of their magisterial service`.

Provost Moodie also became Master of the St. John`s Masonic Lodge of Dunfermline and held other responsible positions but, as you will see, this pillar of society would prove something of a headache for the strict and upright elders of the Kirk Session.

James Moodie was born in Dunfermline in 1763 to John Moodie (or Mudie) and Clementina Stewart.  James had two sisters Helen and Margaret and three half siblings, John, Janet and Robert, born to John, senior, and Margaret Donald, whom he married in 1769 three years after the death of Clementina.  James Moodie`s father John seems to have risen in the world.  At the baptisms of James and Helen he was designated a shoemaker; at Margaret`s baptism in1766 he was a tailor and at John`s in 1772 a shoemaker again.  At Robert`s baptism in 1778 he was a Baillie of Dunfermline Council and he later became a merchant and a man of property. 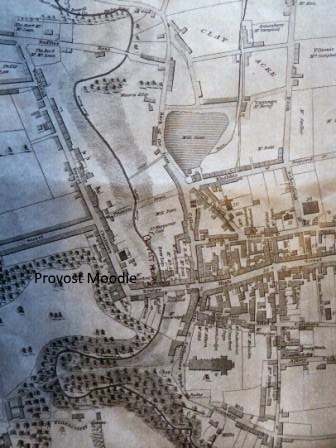 As a young man James Moodie joined the Royal Navy.  In 1783 his father `John Mudie of Muirhead Merchant, late one of the Baillies of the Burgh of Dunfermline`, made a deed of disposition of his property to his only son James by his wife Clementina Stewart, a midshipman on HMS Warrior, and failing him to John and Robert his sons by Margaret Donald.  By this time John Moodie had considerable property to bestow, not only his land at Muirhead in Beath but also plots in Dunfermline Burgh.

James Moodie had an adventurous naval career. In 1807 he received a naval pension of £97 and, when this was reaffirmed in 1837 when he was 75, the Parliamentary Select Committee on Pensions recorded that during his service Moodie was shipwrecked and left on the wreck for two days and in 1782 was present at several engagements under Lord Rodney, including the Battle of the Saintes off Dominica during the American wars.  The committee noted that he had subsequently been Provost of Dunfermline for 15 years.

On his return to Dunfermline, probably with prize money in his pocket, James Moodie set up as a merchant and manufacturer in Bridge Street.  From 1791-3 and again from 1799-1801 he was Master of St. John`s Masonic Lodge and he was soon voted on to the Burgh Council becoming first a Baillie (or second in command) and then Provost.  In 1796 there occurred the most memorable event of Moodie`s provostship when he and a handful of fellow councillors were spirited away to Kinghorn and later kidnapped and kept in the `black hole` of Inverkeithing to control their votes during a fractious parliamentary election.

It was during the 1790s, when he was a bachelor in his thirties, that Provost Moodie`s `little problems` started arriving. 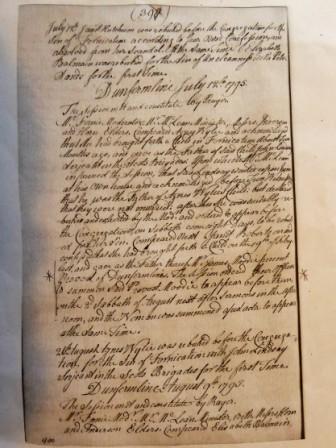 In July 1795 a young woman called Janet Robertson appeared before the Kirk Session and confessed that she had brought forth a child last February and named `Mr. James Moodie Provost of Dunfermline` as the father.  The Session ordered Provost Moodie and the woman to appear before them on the second Sabbath of August.  Although Janet appeared Provost Moodie did not and, after this had happened three more times, Session referred the case to the Presbytery, a higher ecclesiastical court covering Dunfermline and surrounding parishes.  Again Provost Moodie refused to attend and in November, just as Presbytery was about to charge him with contumacy, he sent a letter declaring that he was not a member of the Old Church and therefore not subject to its Ministers and Kirk Session. On the advice of Presbytery, Janet was rebuked publicly for her sin of fornication on three Sabbaths, on the last of which she was absolved, but Session noted that Provost Moodie could not be disciplined as he was not of the established church.

The Register of Baptisms is quite open about this and records that `Janet Robertson in Peatiemuir (Pattiesmuir) brought forth a son child in fornication on 19th February 1795 and which was baptised by the Rev. Mr. Allan Minister of the Church of England named Francis.  The Woman gave as Father of the Child James Moodie Provost of Dunfermline`. In October 1796 the Register of Baptisms records that `Mr. James Moodie Provost of Dunfermline and Margaret Murray had a son born in fornication on the 20th October baptised and named Stewart`, witnesses being Mrs.Holland and Janet Douglas in Edinburgh.   The baby`s name is the maiden surname of Moodie`s mother but who chose it is impossible to say.   This case did not come to light before the Kirk Session until some years later (see below). 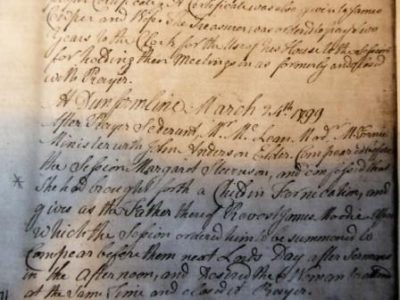 In July 1797 the Register of Baptisms records that `Mr. James Moodie Provost of Dunfermline and Margaret Stevenson had a daughter in fornication baptised and named Margaret`, one of the witnesses being Mrs. Turnbull, midwife.  It was not until March 1799 that Margaret Stevenson appeared before the Kirk Session saying she had given birth and the father was Provost Moodie.  Both were summoned to appear the next Lord`s Day but nothing further seems to have been done and a private deal seems likely. In April 1799 `James Moodie, Esq. Manufacturer and Present Provost of Dunfermline`, was married to `Miss Janet Reddie, daughter of the deceased James Reddie, mason in Edinburgh`.  This marriage, which took place in Edinburgh but was also registered in Dunfermline, was performed by the Revd. James Hall minister of the Burgher Congregation, New Town, and both James and Janet were said to be of St. Andrew Church Parish, Edinburgh.  In August 1800 the couple had a daughter Isabella who was baptised in Edinburgh by the Rev. Alexander Allan.

Provost Moodie`s troubles were not yet over.  Although, as we have seen, Margaret Murray`s son had been born in 1796, it was not until March 1803 that she came before the Kirk Session and confessed that she had `brought forth a child six years ago in fornication and declares that Provost James Moodie is the father of the same`.  Someone has written `Provost Moodie again` in the margin of the minute showing that his reputation lived on although he was now a married man with a legitimate child.

Margaret Murray was rebuked by the Moderator (the presiding minister) and ordered to get a Line from Provost Moodie acknowledging his guilt with her.  Nothing more is heard of Moodie in this case but in May the Session agreed to take Margaret under Discipline and `to rebuke her before the Congregation for the sin of Fornication according to her own Confession`.  She was publicly rebuked three times and finally absolved in July.

Young women seemed eager to confess their sin even at a later date, the most likely reason being that they wanted to get married and could not do so until they were `absolved for their scandal` and restored to the privileges of the church.  The baptisms in Edinburgh may have been to avoid local scandal but, given the arrangements that had to be made, seems to indicate that Provost Moodie at least recognised his offspring.

One wonders what became of Moodie`s children.  Isabella Moodie, the only one born in wedlock, died of jaundice in April 1837 aged 36.  No details of Francis have been discovered so far but there is a record of a Stewart Moodie, weaver in Dunfermline, who married Catharine Roxburgh in October 1835 and died of dropsy at Damside in January 1853 aged 57, which would tally with the  birth of Margaret Murray`s son.

James Moodie ceased to be provost in 1807 and concentrated on his business in Bridge Street.  Things were not always easy for him. In 1821 his business failed and he was declared bankrupt and had to offer his creditors a composition of 6s.6d. in the pound.  The date of the death of his wife Janet is unknown but, as we have seen, he lost his daughter Isabella in 1837 and in the same year his brother, Lieut. Colonel Robert Moodie. Robert was a married man and father of five, formerly of St. Andrews, and was killed in a rebellion in Canada, where he had settled.

James Moodie was also involved in a tussle on the religious front.  In the 1830s many people felt that the Church of Scotland did not stand out firmly enough against patronage and sought greater autonomy for their place of worship. James Moodie, who had long had his differences with the Established Church, spearheaded a movement in 1838-40 to found the Holy Trinity Episcopal Church in Dunfermline.

The 1841 census finds James Moodie aged 78 living in Bridge Street with his nephew, Dr. John Moodie aged 20, a surgeon who had trained in Edinburgh, and one female servant, Isabella Seaton.  He died in February 1847 aged 84 after what might be called an eventful life.

Moodie`s will and testament show that he was a man of substance, with property in Pitdinnie (Cairneyhill), Pittencrieff, Limekilns and Leith Wynd in Edinburgh.  He left money and his gold watch and seal to his nephew Dr. John Moodie and legacies to friends and to the sons and daughters of his brother Robert `who died in America`.  He also left a legacy to a Margaret Moodie or Stalker, wife of William Stalker sailmaker in Leith.  Having raised seven children, Margaret died in 1870 aged 71 and although on her death certificate her mother`s name is left blank, her father is named as James Moodie, Linen Manufacturer.  Was this Margaret the daughter of Margaret Stevenson and did Provost Moodie maintain contact with this particular child and think of her at the end?

Provost James Moodie is largely forgotten nowadays but at least we have Moodie Street to remind us of an interesting (and energetic) character of Dunfermline`s past.

Dunfermline Historical Society Website, J. Barclay, `Did you know that in 1896 Dunfermline`s Provost and some of his Councillors were kidnapped and held captive in the `black hole` in Inverkeithing`?