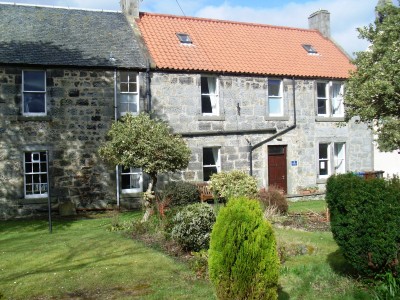 The Cairneyhill Manse as it appears today. However, apart from the dustbins, it probably hasn’t changed much in 170 years.

that the manse in Cairneyhill was once a Seminary for young ladies?

Mrs More was the wife of the Rev John More and they ran a residential school in the Cairneyhill Manse from the 1830’s until the 1860’s.  The pupils came from all over Scotland and abroad.  The census records of that time show the manse had around 12 students in residence.

The Seminary was well known in the district and not always for its educational achievements. Daniel Thomson in his ‘Anent Dunfermline’ gives an account of an incident in the vicinity of the school regarding the Rev Thomas Smith of the UP Chapel in the Maygate.  One day in 1839, the Rev Smith disappeared in a western direction towards the village of Cairneyhill where the girls from the Seminary were a feature in the village.

“On this particular day of Smith’s transit, a number of these Seminary lovelies were on ‘out lease’ and enjoying themselves in the ‘twa staney acre’ in front of the two houses constituting ‘Thimble Ha’ – where lived the steady-going, sober-minded John Bruce, elder in the kirk and weaver……..  Smith having got a dram, had gone to a livery stable in Dunfermline, hired a horse and made up his mind he would ride west and see the girls at Cairneyhill – he had enjoyed their company before.  He dashed along by Pittencrieff Street, through the Cut down Kate Simpson’s Brae, through  Crossford village and turning to the right at Pitfirrane gates, plunged into the woodland and was soon at Thimble Ha’.  The sight of the girls romping about was quite too much for him.  He jumped off the nag, seized the sonsiest lass of the lot and began his courtship – rather wildly ……. The drama ends by the girls rushing screaming down the brae to the house, Mr Smith getting thumped by John Bruce and Mrs More sorting things out and hushing things up, though not enough to prevent Mr Smith having to go west again this time in disgrace to Glasgow.”

Mrs More died in 1866, at the age of 74 years. The following is an extract from her obituary.

“Mrs More’s Seminary for Young Ladies was known all over Scotland and was regarded as one of the best of its kind being conducted in a cheerful, kindly and pious manner…….  In her and her husband’s old age the young ladies were less closely looked after and much late hour courting and covert enjoyment with young sparks from Dunfermline and district were enjoyed while the good minister and his wife were sleeping …….”