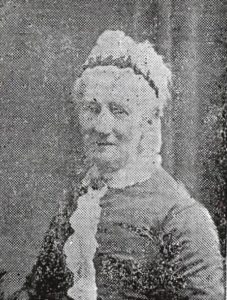 Few people nowadays have heard of the Female Industrial School or of its inspirational head teacher, Mary Thomson.  However, for a large part of the 19th century this school was one of the largest and best known schools in Dunfermline and this success was largely due to Mary Thomson.

Before we deal with the life of Mary Thomson, something has to be said about the history and origins of the Female Industrial School.  In 1830, a meeting was held to establish an Infant School Society in Dunfermline.  In November 1832 the Fife Herald reported that the Union Masonic Lodge in School End Street (now part of Pilmuir Street) was nearly finished. The ground floor had been bought by the Infant School Society and would be fitted out as a teacher’s house and school room. The Masonic Lodge was situated behind the Erskine Church, across the road from the present entrance to the bus station.  By 1838 however, the school had accumulated a debt of £300. It was only able to continue due to the directors obtaining a Government grant of £200 on the condition that the other £100 was raised in the town.

While the Infant School continued in School End Street, a Female industrial school had been established at 64 High Street (it later became Dick’s Temperance Hotel).  The school was initiated in 1839 by Mrs J Inglis, Mrs Kidd and other ladies who were concerned about the level of education of girls in the town.  The word ‘Industrial’ in the title refers to the emphasis on the teaching of needlework, knitting etc.  In a report in the Saturday Press in July 1861 about the origins of the school, Mrs J Inglis stated “that she insisted at first of having no more than 30 pupils, and when she and Mrs Kidd, now gone to her rest, had canvassed the Horse Market for girls, many parents were most reluctant to send them to the school“.   The Rev Chalmer’s History of Dunfermline states that ‘in 1845 there were more than 90 poor children on the roll. The school was financed by subscription and weekly fees of  one penny per pupil.  The children ‘learn reading and sewing and have special care taken of their religious and moral training’. 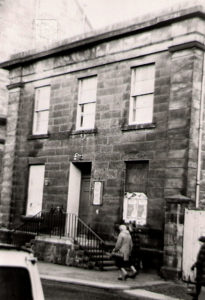 Mary Thomson was born around 1820 in Edinburgh, the daughter of a glass cutter, and she came to Dunfermline around 1850 to take up a position at the Female Industrial School.  According to Daniel Thomson’s Anent Dunfermline, “she was of average height with light coloured hair and a clear complexion which became rather fiery in later life. She was very short-sighted and had to look at things in a close scrutinising fashion.  She had a sweet disposition and was always well-liked.”

During the 1850’s, under Mary Thomson’s leadership, the school rapidly increased in pupil numbers to such an extent that by 1859 the school premises were totally inadequate.  The Saturday Press on 4 June 1859 reported:

“There are at present about 400 children receiving a most excellent education at a cheap rate.  The present accommodation is quite inadequate for the purposes – so much so, indeed, that many of the classes are taught in the open air and unless more room is obtained the numbers will have to be reduced.”

The Female Industrial School was held in such high esteem by the local community that within months of an appeal for funds to enable the school building to be extended, the sums needed had been raised.  In July 1859, a list of subscribers was published in the Saturday Press.  Some of the people contributing funds are shown below: 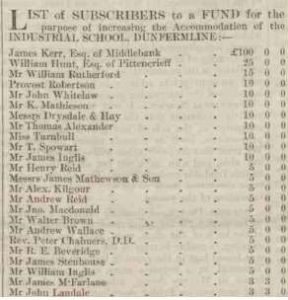 By February 1860 there was a notice in the Saturday Press asking builders to submit estimates for the work and by July 1861 the new building was in place. The Female Industrial School was now the largest in Dunfermline with 600 pupils.

The school was under the superintendence of a society of ladies who seem to have had a great deal of influence in raising funds which enabled the fee to be kept at one penny per week.  Was the success of the school due to the supervision of these ladies or to the leadership of Mary Thomson?  The best way to answer this question is to look at some of the reports of the annual inspections of the school.

Before the 1872 Education Act schools were subjected to annual ‘visitations’.  Visitors usually included representatives from civic and ecclesiastical authorities and they would attend at the end of the school year to listen and watch as the children were tested by their teachers in all subjects.  Reports of these ‘visitations’ were reported in the local Press and below are some extracts of reports on the Female Industrial School.

“……………………What admirable order was observed amidst a mass of young children. At the last annual examination a woman who was troubled (as many a poor woman is) with a set of noisy urchins at home, was confounded at the stillness of the school when Miss Thomson touched the little hand bell that lay on the table.  Enamoured at this great discovery for keeping boisterous children quiet she exclaimed in conscious triumph “I must buy a bell too and I’ll ring it and keep my bairns at peace.” He did not know how the experiment succeeded, but she would probably learn that the charm did not lie so much in the tinkling of the bell as in the hand that touched it.”

“This school was examined on Wednesday in the presence of several hundred spectators.  We observed among those present – Provost Whitelaw; Bailies Hay and Red; Rev Dr Michael, Rev Messrs T N Brown, Alston, Tennant, J Johnston etc. This school is certainly the largest of any kind in Dunfermline – one of the largest, if not the largest of its kind in Scotland. The number on the roll is 600, almost all girls……..  Whatever may be said as to the original wishes of its founders, or as to the manner in which these intentions have been carried out there can be no doubt that the Industrial School is one of the noblest institutions in our town. This has been accomplished, no doubt, to a great extent by the Ladies’ Committee but chiefly by the tact and management of Miss Thomson, the teacher of the school.  Under the presiding genius of this accomplished lady, every department of this extensive machine moves with the regularity of clockwork.”

The reports in the Press of these annual inspections always gave excellent reports on Miss Thomson and the running of the school.  However, just in case we doubt the objectivity of these reports – perhaps the reporters were in awe of the great and good of Dunfermline society who attended the Industrial School inspections – below is an extract from a report by a Government appointed inspector.

“The following is a summary of the report of Dr Woodford, Government Inspector of Schools, in reference to the Industrial School, Dunfermline”.

“The additional accommodation provided since the time of the last inspection seems fully occupied ……… attendance on the day of the inspection – 318 in girls school and 127 in infant school.   ……..I have never seen children more orderly or happier in school, or more attentive to what they were engaged in and every class made a satisfactory appearance. Dictation on paper and grammar were better than usual and it will all the more show the general efficiency, to say that the only decided shortcoming was that of two girls in decimals, who otherwise acquitted themselves remarkably well.”

The organisation of the Female Industrial School and indeed all the other schools in the area changed dramatically with the passing of the Education (Scotland) Act 1872.  The Act made elementary education from the age of 5 to 13 compulsory and schools were taken over by the state and managed by locally elected School Boards.  The Female Industrial School was handed over by its committee of supervising ladies to a School Board in 1873.  The school became mixed with the admission of boys, although the majority of pupils were girls.  From the school log book, which had to be kept by the Head Teacher, it would seem the School Board took their duties seriously. There were frequent visits by Board members to inspect registers and chase up pupils with poor attendance and to oversee the standard of pupils’ work.  It is impossible to say, for certain, how Mary Thomson would have taken to these changes but the late 1870’s could not have been an easy time for her. She had spent almost 25 years building up the school with the only supervision coming from the Ladies’ Committee, but she now had a School Board looking over her shoulder and dictating what should or should not be done in the school.  In 1881, Mary Thomson resigned from the Female Industrial School and accepted a retiring allowance. She continued to live for several more years in her rented house next to the school in Bath Street. (The street name had changed from School End Street to Bath Street)

The question which now becomes apparent is, what happened to the Female Industrial School after Miss Thomson’s resignation?  For the next ten years it continued under another head teacher.  However, by the late 1880’s the existing school buildings were considered inadequate and there was a shortage of school accommodation for pupils in the area.  Several proposals were put forward, including the building of a completely new school to the west of Dunfermline, but eventually the decision was taken to build a new school in the existing Female Industrial School playground at a cost of £6,000.  In 1892 the new school buildings were completed and it was renamed Queen Anne School which is now known as Queen Anne High School. 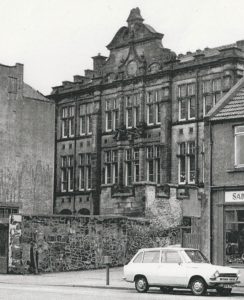 The old Queen Anne School building, in 1973, before its demolition to make way for the building of the Kingsgate shopping centre

Miss Thomson left her house in Bath Street in the mid 1890’s and moved  to the school house in Halbeath.  The school master at Halbeath was John Robertson and his wife was a former teacher at the Female Industrial School. It would appear that Miss Thomson moved in with her friends in Halbeath when her health began to fail.  She died in March 1896 from mitral incompetence (heart failure).  In her will she left her entire estate to her friend Bessie Robertson, wife of John Robertson.  The following is an obituary which appeared on 4th April, 1896 in the Aberdeen Journal: 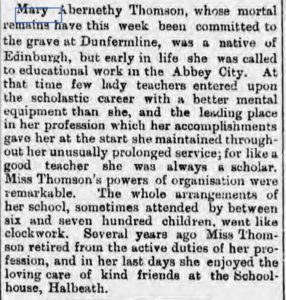 Obituary in the Aberdeen Journal

She is commemorated on a headstone erected in the cemetery in Dunfermline by John Robertson.

who was for upwards of 30 years

Head mistress of The Female

and who died at Halbeath