The Battle of Kinghorn 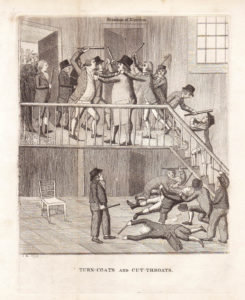 ..that in 1796 Dunfermline`s Provost and some of his councillors were kidnapped and held captive in the black hole in Inverkeithing?

If you think that elections nowadays get a bit nasty you want to look back to the 18th century when they frequently became heated affairs involving mobs, threats, fisticuffs and bodily harm.

At the end of the eighteenth century, in a Scottish population of about 1.5 million, only around 3000 adult males had the vote.  Scotland could return 45 MPs to the Parliament in London, 30 representing counties and 15 representing groups of burghs. Dunfermline was part of the electoral constituency of the Stirling Burghs alongside Stirling, Inverkeithing, Queensferry and Culross (then in Perthshire).   Each burgh, whatever the size, had one vote and the council (of 20 or so members) elected a delegate or commissioner to represent them at the election in the returning burgh.  This delegate was obliged to return the majority vote, whatever his own politics might be.

At a time of great animosity between the Whig and Tory political factions, elections could be devious and tumultuous affairs. Although the majority of people could not vote, they could be roused to frenzy on behalf of their favoured candidate, especially when bribed with money or drink or threatened with loss of employment.  Elections were frequently rigged and the electors, usually local councillors, were occasionally spirited away, held captive and plied with food and drink until it was either too late to vote or they had agreed to vote as their captors wished.

In June 1796 the contest for the MP for the Stirling Burghs was between Sir John Henderson of Fordel (Bart), for the Whigs, and his cousin, the Hon Andrew Cochrane Johnstone, for the Tories.  Dunfermline Town Council had determined on June 16th as the date when they would choose the delegate to represent them at the Stirling Burghs election at Inverkeithing, the returning burgh.  The Tory supporters of Cochrane Johnstone, including John Hutton, who was on Dunfermline Council but living in Kinghorn, decided to remove part of the Council until the selection of the delegate was safely over.  On June 13th they quietly transported Provost James Moodie, Robert Hutton, William Anderson and Deacons Charles Anderson and Robert Young, to Kinghorn. There they were lodged at the inn run by William Skinner and his wife Johanna or `Lucky`.

When news of this reached Dunfermline it caused great excitement among the Whig supporters.  Sir John Henderson had already roused his Fordel colliers to fever pitch and Dr. Henderson tells us in his Annals that for several days he had kept them `parading through the streets, armed with bludgeons, to intimidate voters and the incorporated trades.  They broke their opponents` windows amid boisterous huzzas, forced entry into several houses, rang the Auld Kirk and Council bells, and fired off squibs and sky-rackets thick and threefauld`.  Now the cry `To Kinghorn!` was raised and a crowd of weavers, who tended to support the Whigs, and colliers marched off with their weapons to free the captives and bring them back.  They were supported by Sir John`s friend Col. James Francis Erskine who raised a hotch-potch army and, with banners waving, led them to the inn.  At the inn a violent confrontation ensued between the captors and Henderson`s faction in which no-one was killed but a few people were seriously injured.  This became known as the `Battle of Kinghorn`.

John Kay`s caricature shows the battle underway, with Col.Erskine and his followers attacking and being rebuffed by John Hutton and William Skinner the landlord.  The figures in the background are probably the beleaguered Provost and his councillors.

Eventually, on June 14th or 15th the councillors were escorted back to Dunfermline and the council minutes indignantly record what happened next.  General unrest and threats of bodily harm against the council continued with the encouragement of Sir John Henderson and his supporters Col. Erskine and William Wemyss, Esq. of Cuttlehill.   On the morning of the 16th , after the church bells were rung without authority at about 9am, the councillors sneaked into the Council Room through the nearby house of John Wilson, vintner, but they were jostled so much by the mob that the Provost felt obliged to read the Riot Act at the Council House door.

While the councillors were waiting for the prescribed time to choose the delegate to carry their vote to Inverkeithing, in rushed men led by William Wemyss and Alexander Law, messenger-at-arms, who drew a pistol and threatened to shoot anyone who tried to stop him.  He had a warrant for the arrest of the five men who had been held captive at Kinghorn as well as John Hutton their captor, for their part in the fray and the life-threatening injuries caused there.  The councillors were dragged from the Council Table, forced into the post chaises which had been used by Sir John Henderson during his canvassing and, accompanied by Sir John`s colliers with their bludgeons on foot, and others of his adherents on foot or horseback, they were taken by out-of the-way roads to Inverkeithing where they were lodged in the insalubrious `black hole` of the jail, normally used for felons.

With these six out of the way, 15 council members were left and, after six councillors left the meeting in disgust about the indignity done to their colleagues and the affect on the quorum (no doubt one  of the aims), the remaining nine unanimously chose William Wemyss, Henderson`s friend, as delegate. This was short-lived, however.

The six men held in the `black hole` had been forced to sign a document agreeing to stand trial at Edinburgh but this was intercepted and overturned and, after enduring an uncomfortable day, they were freed.  They apparently walked back to Dunfermline, arriving at 8 p.m. The Provost immediately convened a fresh meeting but, before this could be held, the doors of the Council Room had to be broken open, having been locked by Baillie James Hunt, another crony of Sir John Henderson.  The meeting, which was finally held at 11 p.m. was attended by 12 members and chose Provost James Moodie as their delegate.  According to the council minutes the `unwarrantable proceedings` leading up this, which were `so very inconsistent with the liberty of the subject and the freedom of election`, were the work of Sir John Henderson and his adherents in order to deprive the Council of their right to elect a delegate. The carrying off of the six councillors had enabled the pretend election of Wemyss to be held without a legal quorum of the Council.

And how did the election go in Inverkeithing on June 20th?   In the event, Cochrane Johnstone won by three votes to two,  Stirling, Queensferry and Culross voted for him, but Dunfermline (somewhat surprisingly) voted for Sir John Henderson and Sir John, being the Inverkeithing delegate, naturally voted for himself.  Sir John later contested the result in London in a case which he lost.  Lucky Skinner, the landlady of the Kinghorn inn, was called as witness and her cunning and couthy answers to the judge amused the court and led to her becoming something of a local celebrity.

The political machinations of the day do not seem to have come to much and, with a bit of moderation on both sides, the Battle of Kinghorn and the two brief imprisonments of Dunfermline councillors might have been avoided.  But then, the past is another country.  Or is it?