This fascinating illustrated letterhead gives a vivid insight into one of the largest building and joinery firms in Dunfermline in the late 19th and early 20th centuries. The image is taken from an estimate submitted to solicitor William Reid, agent for Carnegie Dunfermline Trust, regarding substantial work to be carried out on building the new Carnegie Baths at Pilmuir Street, Dunfermline, in 1905. The original document is held in the Carnegie Dunfermline Library Local History Department.

The letterhead gives perhaps a somewhat grandiose impression of the size of the Philp family business premises at 97 Campbell Street, Dunfermline. Never-the-less, the premises were necessarily large as they encompassed all building trades, along with a substantial sawmill business. The upper sketch shows the premises as seen from the south, with the railway line leading into Dunfermline Upper Station. The lower impression gives the view from the north with Campbell Street and the homes of the Philp family members in the foreground. The stone built houses are still in situ and appear to have been built by Messrs Philp, as a centre stone above the archway, leading to what would have been the firm’s yard at the rear of the houses, contains the interwoven letters ‘H&JP’. 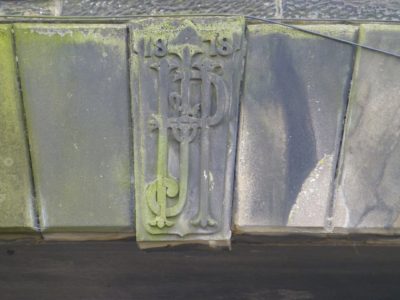 H & W Philp was founded in October 1867, by the brothers Henry Burt Philp and William Philp, both joiners to trade and sons of James Philp, Carting Contractor, and Jean Philp, nee Burt. The business commenced in premises in Foundry Street, Dunfermline, but the partnership was short-lived as, in October 1870, William left to join another brother, John, in setting up a joiners and undertakers business in East Port, in premises formerly occupied by John and Robert Bonnar. Henry remained in control of the original business, ultimately taking his younger brother, James, into the business under the title of H & J Philp. At some stage, prior to 1880, the firm moved to larger premises on the south side of Campbell Street, near to its eastern end.

In the 1861 census, Henry Philp then 24 years of age and designated a wright (joiner), is residing with his wife Mary at High Street, Dunfermline. Ten years later, at the time of the 1871 census, Henry, Mary and four of a family are residing at Foundry Street, Dunfermline, when he is noted as a joiner, employing 6 men and two boys. By the time of the 1881 census Henry, wife Mary and children, James (19), a joiner; John (17), also a joiner; Henry (14), a wood turner; Mary (12), Jean (9), Janet (7) and George (4), all scholars, are residing at 67 Campbell Street, Dunfermline. Henry is then described as a master joiner, employing 14 men and 7 boys. The family were still residing in Campbell Street at the time of the 1891 and 1901 censuses. In each of those censuses no record was made of the number of employees engaged by an employer, although it can reasonably be assumed that Messrs Philp’s business was continuing to grow during this period and the number of employees would be substantial, encompassing most trades connected to the building industry.

Around the turn of the century Philp’s business was probably at its peak and one of the projects undertaken at that time was the building of the new model lodging-house at the north end of Bruce Street, Dunfermline. The Dunfermline Press of 8th January, 1898, reported on the start of this project and that Messrs Philp were ‘to execute the whole of the different works – including masonery, joinery, plumbing, slating, painting, heating, cooking and ventilation’ – all for a little under £4,000. The building was designed to provide accommodation for 150 single men and for 25 married couples and children.

When Henry Philp died in 1902, his obituary in the Dunfermline Press of February, 15th, that year, stated that the business had been involved in designing and erecting numerous dwelling-houses and public works in the town and district. The business connections extended to Leith and the West of Scotland, where Mr Philp was well known. Following Henry’s death in 1902, and that of his brother and partner, James in 1915 the business appears to have been run by Henry’s three remaining sons, John, Henry and George (eldest son James had died in 1905, aged only 43 years). Henry Jnr. died in 1932, aged 66 years, and the following year the company went into voluntary liquidation.