Dippy the Dinosaur and Andrew Carnegie 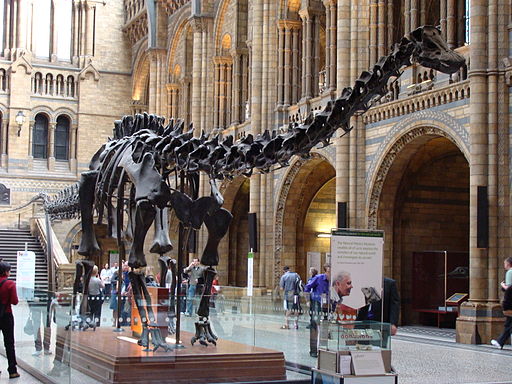 that there is a vital link between Dippy the Dinosaur and Andrew Carnegie?

Dippy the dinosaur has been much in the news lately because, having been a scene stealer at the Natural History Museum in London since 1905, it is now being replaced in the grand central hall by a blue whale skeleton and, like the old monarchs, is going on progress to eight venues around Britain.

But did you know that it is thanks to Andrew Carnegie that Dippy exists in the first place?

Dippy is a diplodocus (meaning double beamed because of its very long neck and tail) a class of dinosaur that lived about 150 million years ago. Experts were aware of the existence of such a dinosaur giant but imagine the excitement when the fossilised bones of one were uncovered by workmen in Wyoming in 1898.  Andrew Carnegie heard about the find and decided to fund the excavation, at least in part with the view to obtaining the skeleton for his new museum in Pittsburgh.  Because it was slightly different from specimens described before, the dinosaur was named Diplodocus carnegii in honour of its new owner and promoter.  Apparently it was affectionately named `Dippy` from the start by Carnegie`s friends.

Not long afterwards Carnegie was entertaining Edward VII at Skibo Castle (as one does) when the King spotted a photograph of the diplodocus on the wall.  He told his host how much he would like one for the Natural History Museum and Carnegie decided to commission a replica.

Painstakingly the 25 metre (83 foot) skeleton was replicated in plaster of Paris and the 292 bones were packed in 36 cases and transported across the Atlantic.  After what must have been a complicated assembly job, the model was ceremoniously unveiled on May 12 1905 before 300 of the great and good of London, elsewhere and the zoological world.

Museums all over the world heard about the diplodocus and wanted one, and nine more replicas were created and sent to such cities as Paris, Berlin, Vienna and Moscow.  Pittsburgh of course makes much of it and Dunfermline`s Carnegie Birthplace Museum has its own small Dippy exhibit, including the history of the find, scale models and a fibreglass copy of the skull.  Now that Dippy is on the move and will be seen by thousands of people in eight venues all over Great Britain, it is strange to think that it bears the name of Andrew Carnegie and owes its fame to this hand-loom weaver`s son from Dunfermline.

Details taken from the websites of the Natural History Museum, London, and the Carnegie Birthplace Museum, Dunfermline.