In 1920, David West, a former bus driver with the Autocar Bus Company (ABC), Dunfermline, founded his own road haulage business at James Street, Dunfermline before moving to Foundry Street, Low Beveridgewell and, latterly, to Rumblingwell. The early history of the firm is somewhat vague but it is known that in 1924, Mr West operated ex-army Karrier vehicles with bodies which could quickly be converted from lorries to buses.    With the bus side of the business, Mr West operated a route from Dunfermline to Burntisland, via Aberdour from May, 1924, and then another from Dunfermline to Limekilns from August, 1925.  In 1926 the bus side of the business was allowed to lapse in favour of the haulage operation which in the main involved the carriage of produce, mainly grain and potatoes, for local farmers.

Left. Two of West’s early lorries above, in Leith during the 1930s, with the small Bedford on the left being dwarfed by the AEC Mammoth and trailer. Right, from c.1944, driver Jimmy Hynd’s Albion eight-wheeler, fully hand-loaded with 16 tons of potatoes outside West’s premises at Rumblingwell, Dunfermline.

The haulage business flourished and in the early to mid-1930s West moved to larger premises at 179 Rumblingwell, Dunfermline.    By that time West’s fleet had increased to some ten vehicles, mainly Albions, AEC and Maudsleys, and David West’s son, Jim, had joined the firm.

Jimmy Hynd, interviewed in 1999, spent most of his working life with David West and recalled starting work at Rumblingwell as a 15 year old driver’s mate in 1937.    The driver’s mate, or second man as he was more commonly known, was compulsory at that time and part of his duty, as well as assisting in the loading and unloading the lorry, was to operate the trailer brake which was operated by a lever located at the passenger side of the driving cab.    For the next two years Jimmy Hynd worked as second man on an Albion eight-wheeler driven by Jim West.   These were the days before palleted loads and fork lift trucks and young Jimmy was soon involved in loading and unloading the sixteen tonner by hand, no mean feat as this regularly involved twenty stone sacks of flour being transported from Chancellor’s Mills at Leith, to the Co-operative Bakery at Randolph Street, Dunfermline.

Left. Another of West’s Albions at Rumblingwell loaded with 2 cwt sacks of grain – driver Pat Tierney.
Right. West’s AEC low loader unit on Halbeath Road, opposite Hill’s Laundry, loaded with a Royal Navy mini submarine which was taken around the country in World War 2 and displayed to raise funds for the war effort.

During that era Jimmy Hynd also regularly accompanied Jim West in transporting cast iron stoves, another particularly heavy item, from the Carron Iron Works in Falkirk, to customers in London and Southampton.   There were no motorways in those days and the London run via major towns took two to three times as long as the present-day journey.   Those were, of course, the halcyon days before the introduction of tacho-graphs to keep a check on driver’s hours and it was not uncommon for Jimmy to find Ginger nodding off at the wheel on these long journeys south.   This led to Jim West ‘occasionally’ giving young Jimmy a ‘shot’ of the driving before he attained the then legal age of seventeen years.    Consequently, by the time he was seventeen Jimmy Hynd was a more than competent lorry driver and soon had his own Albion eight tonner, reg. no. CFG 239, vehicle of 1936 vintage.    Jimmy’s runs then, at the start of World War 2, mainly involved transporting sacks of grain from the West Fife area to either Glasgow or Edinburgh.   As West’s lorries were too heavy to be taken aboard the ferry at Queensferry, the Edinburgh run, via the West Fife villages of Cairneyhill, Torryburn and Newmills to Kincardine Bridge, and thereafter via Grangemouth, Bo’ness and Linlithgow (no by-passes in those days) took one and a half hours.

During the Second World War, West’s transport operation came under the control of the Ministry of War Transport who dictated that only goods which had a bearing on the war effort could be transported around the country.   This included not only foodstuffs and other essentials for everyday life but the transporting of lorry loads of munitions from the Royal Naval Armament Depot at Crombie to Chatham Dockyard, the latter being kept very ‘hush-hush’ at the time for obvious reasons.

The following photos, taken in 1944, show West’s drivers in war time navy blue battle dress uniform with shoulder flashes showing B.R.H.O. (British Road Haulage Organisation).    Two of these drivers, George Templeman and Alex Ferguson served a six month tour in 1944 on this operation.   Both were engaged in taking in conveying food and materials to the south of England for onward transmission to the troops in France.

David West is in the centre of the first photo with George Templeman and Alex Ferguson second and third from the right.

At the end of the war, West’s, like all other businesses of the time, began the slow process of returning to normality only for the transport industry to be nationalised in 1949 by the Government of Clement Atlee.   West’s operation then became part of British Road Services (B.R.S.). David West was appointed Senior Group Manager, with control of the B.R.S. depots at Dunfermline, Kelty, Kinross, Alva and Alloa. Jim West was appointed Depot Manager at Dunfermline, and group workshops were established at the west end of Pittencrieff Strret, Dunfermline.   In 1952 the Dunfermline B.R.S. depot moved from the by then restricted premises at Rumblingwell to a larger yard at West Nethertown.

In 1954, David West took advantage of de-nationalisation and, on purchasing Galloway the plasterers premises at Touch (part of the old Touch Bleachfield), Dunfermline, he re-established the business of David West & Son, setting up in direct opposition to B.R.S. which continued for some years as a government controlled organisation.

In 1956, David West fell into poor health and retired, whilst Jim West resigned from his position with B.R.S. and became managing director of West’s Transport.   The business once again flourished during this period and, with many customers such as Hugh Elder & Son, and Gray & Harrower, both local grain merchants, and Caldwell’s Paper Mill at Inverkeithing, providing sound trading bases.

Left. West’s drivers Jimmy Hynd and Jimmy Dick with a young David West, grandson of the founder, at a 1950s Civic Week Parade in Dunfermline.
Right. One of West’s low-loader units conveying an unusual load en-route from Balfour of Leven to Liverpool Docks for shipment to Dublin.

In 1961, West’s Transport acquired the business of one of its main competitors, Lovett Raine & Co., based at Woodend, Cowdenbeath, the main attraction being the twelves ‘A’ licences held by Lovett Raine.     An ‘A’ licence as issued to commercial vehicle operators in respect of each vehicle by the Ministry of Transport, via the Traffic Commissioners, was much sought after as it entitled the holder to transport any type of goods anywhere in the U.K.    This type of licence was not granted lightly and each application was vigorously opposed by, among others, British Railways Board who saw the erosion of rail freight business onto the roads.

In 1966, West’s business, then operating some 50 vehicles, was sold to Transport Development Group Ltd., a holding company with over one hundred acquisitions throughout Europe and Australia, with Jim West becoming the Regional Managing Director. He was also a director of Fife Hauliers Group Training Scheme and a former Chairman of the Fife Area Road Haulage Association. In 1975, West’s merged with John Russell (Bathgate) Ltd., another haulage company in the in the same group, and at that time Jim West retired from active business, although he joined forces with his son, David, in a haulage brokerage enterprise run from the family home at Jaroda, Knockhouse Hill, Crossford, a role he still held at the time of his death in 1984. 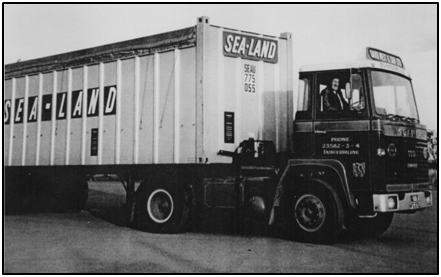 C. 1973 and Jim West is at the wheel of a new Scania tractor unit loaded with a Sea-Land container unit.