Daniel Thomson: A Man of Many Parts 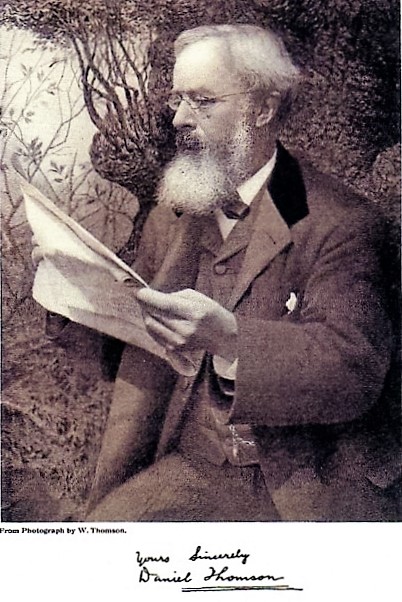 No street or building in Dunfermline is named after Daniel Thomson but it does not take long for anyone involved with Dunfermline’s past to come across him.  In his books The Weavers Craft and The Hammermen of Dunfermline, in his numerous articles in the local press and in ‘Anent Dunfermline (nine volumes of invaluable manuscript and newspaper cuttings) his contribution to local history is immense.  The life story of this son of Dunfermline reveals that he was truly a man of many parts who, against all odds, rose from rags to comparative riches.

Daniel Thomson was born in 1833 in the Spittal, an old weaving district near St. Leonard’s Hospital to the south of Dunfermline, the second of four sons of James Thomson, weaver and shoemaker, and his wife Marion Mackay.  The boys’ mother died when they were little and they were brought up in great poverty, by their father, who had a drink problem, and their grandmother.1 At nearby Brucefield House, Daniel, ‘a little ragged boy of ten years’, his younger brother James and one or two others were taught reading and writing by Janet and Christina Struthers, daughters of Alexander Struthers, proprietor of East Spinning Mill, Brucefield and his wife Mary Reid.  Daniel, a bright boy, never forgot this kindness or the other side of life that it revealed to him.2 When he was eleven, Daniel began an apprenticeship as a hand-loom weaver but by the time he had completed this in 1851, the hand loom was being usurped by the power loom and he had to seek other employment.

A position in a drapery warehouse in Jamaica Street, Glasgow, followed but, after several years of hard work not much to his liking, Daniel returned to Dunfermline to work at Erskine Beveridge’s new power loom factory at St. Leonard’s. When failure in the banking system brought short time to the Dunfermline work force, Thomson occupied his spare hours in studying mechanics, mathematics, shorthand, literature and music, all of which would prove useful in later life.3

In the mid-1850s, Thomson joined Canmore Street Congregational Church where, among other activities, he trained two boys’ bands connected with the temperance movement, a cause he supported4. He had hoped that the church would help him train for the ministry, but this did not materialise.5 In 1858 Daniel married Margaret Cruikshanks and, in 1862, they moved to Kirkcaldy, where he found work as a power loom tender at Lockhart’s Mill.  In February 1863 the young couple had a son James but, in December, Margaret died from phthisis aged just 27. 6

Here was Daniel, a young widower, having to work, but with a baby boy to look after.  He must have despaired.  But after this sad time his luck began to turn.  In 1864 his prize essay for the non-electors of Kirkcaldy entitled ‘The means of elevation and the formation of character among the working classes’ was published, he became manager at Lockhart’s, and in June 1865 he married Janet Wishart from Kirkcaldy, who would be his companion for the rest of his life.  For part of his eight years in the Kirkcaldy area, he served on the Parish Council.7

Daniel Thomson was staunchly Liberal in politics – the left for those days – and in favour of political reform.  In 1870, when The Reformer newspaper was launched in Edinburgh, he left the linen industry to become sub-editor, and later editor, covering the reforms advocated by Independent Liberalism, a political force in the capital. 8 The Reformer was short-lived, however, and in 1874 Thomson returned to the linen industry and held managerial positions in Kinross, Kirkcaldy (the Wemyss Works) and Montrose (Richards Ltd) finally returning to Dunfermline in 1878 as manager of the Abbey Gardens Works.9

At this time Thomson was developing an interest that would change his life.  In The Reformer, he had contributed an article on the Dunfermline Co-operative Society and he now joined the committee and promoted it where he could. At the Carlisle Congress in 1887, he presented a paper on ‘Co-operative and Competitive Trade and Dividends’ which brought him into prominence and, in September of that year, the Dunfermline Society appointed him their representative on the Board of the Scottish Wholesale Co-operative Society (SWCS), a position he would hold almost to the end of his life.10

Thomson found that becoming a Director of the SWCS opened up a new world to him.  He was entrusted with several commission of enquiry and was selected to undertake purchasing missions abroad, his destinations including Holland, France, Switzerland, Spain, the United States in 1897 and Ceylon in 1902.  He wrote about his travels, including in 1897 ‘To the west and back: sketches of tramp and travel in America’.  In 1907 the Scottish Co-operator published his ‘A Run on the Continent’, the last bit of writing he did, and also had it printed as a booklet.11

This was all part of a long writing career. Under his own name, or the pen names of ‘Freestone’ or ‘Wanderer’, Thomson wrote a stream of articles for the Scottish Co-operator and for the local press. From January to June 1897 the Dunfermline Press serialised his ‘West of Fife story’ called ‘John Orrason or the Adventures of a Social Castaway’.  Truly a polymath, Thomson was also a musician, an artist who enjoyed sketching and painting and a poet who wrote ‘A Rover’s Rhymes’ and other verses.12 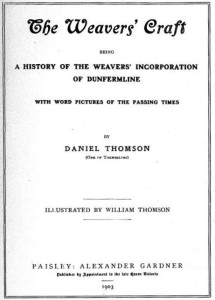 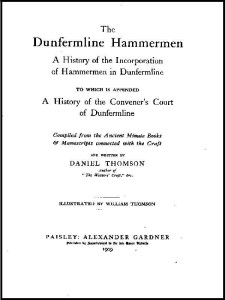 Thomson also became a respected historian of Scotland, Fife and Dunfermline.  In The Weavers’ Craft of 1903, which is dedicated to Andrew Carnegie, Thomson recounted the history of the weavers’ incorporation of Dunfermline, set within the context of a changing town, while, posthumously, in 1909 came The Dunfermline Hammermen.  Thomson died before he could fulfil his intention of publishing ‘Anent Dunfermline’ his eclectic collection of items that focused on local events, people and places.  These nine volumes, compiled from 1893-1908, remain a valuable source for local and family historians.13

Daniel Thomson became well-known in Dunfermline. At the huge demonstration in the Public Park after the laying of the memorial stone of the Carnegie Free Library in July 1881, he was chosen to present an illuminated address to Andrew Carnegie on behalf of the working class.  A genial man and an able and ready lecturer, Thomson often spoke at Burns celebrations, at the Auld Weavers’ Drive and at the Donald annual dinner for the poor.  For forty years Thomson was acquainted with Sir Henry Campbell- Bannerman, who became Liberal Prime Minister in 1905, and their last conversation took place in Dunfermline not long before Thomson died.14

One sad note in Daniel and Janet’s life was the loss in 1887 of James, the son of his first marriage, who was a promising young journalist in Newcastle.  He died just before his 24th birthday from the same condition that killed his mother.15 Of the three children of his second marriage, Daniel junior became a well-known jeweller, watch and clockmaker in Dunfermline, William became a commercial artist for the Co-operative Society in Govan, and Christina (Mrs. Lawrence Anderson) became a woman of property.16

Daniel Thomson died at home, Rolland House, 33 Rolland Street, on February 14th 1908, aged 74, his wife Janet following a few days later.  Both were buried in Dunfermline Cemetery where their last resting place is marked with a fine headstone.  In a life full of interest the path had not always been easy, but it had led Daniel Thomson a long way from the ‘little ragged boy’ who first learned his letters at the big house at Brucefield.

‘Litterateur, Musician and Reformer’, The Scottish Co-operator (Scot.Co-op.) Feb. 21, 1908, pp. 179-80. Young Daniel’s childhood was not all gloom and doom. He had happy barefoot days out to Broomhall and Pitreavie with the Juvenile Teetotallers, being fed with penny loaves, penny ‘ladies’ (whatever they were) and unlimited milk on the way. He attended Sunday School in Rolland Street and with his brother James was ‘taken in hand somewhat’ by a small congregation of Morrisonians in the Maygate. Then there was the excitement of the Baal Fire, a big bonfire lit along the main road south in May when the boys would run after the Edinburgh coach shouting at the passengers on the top ‘a ha-penny or a penny for the Baal fire’. Anent Dunfermline, Vol.1, 241; Vol. 5, 71, 627.

4.. Daniel was always close to his brother James, who became a weaver, sailor, journalist and School Attendance Officer, living in Kirkcaldy for much of his life with his large family. James died in 1907. Anent Dunfermline, Vol 8, 682.